On Wednesday night in Manchester, NH, the Double A affiliate of the Blue Jays, the New Hampshire Fisher Cats will host the Eastern League's All-star Game at Northeast Delta Dental Stadium.

The 2011 Eastern League All-star Game will feature the top prospects from the Western Division (Erie, Altoona, Akron, Bowie, Richmond and Harrisburg) taking on the best from the Eastern Division (New Britain, Portland, New Hampshire, Binghamton and Trenton). Each team is comprised of 24 players, with all of the league's teams being represented by at least 1 pitcher and 1 offensive player.

Also included in the All-star festivities will be a pre-game homerun derby which will feature two Fisher Cats All-stars, outfielder Moises Sierra and switch-hitting first baseman Mike McDade. First place in the homerun derby wins $1,000 and second place is awarded $500, so the drive will certainly be there for the participants to put on a good show. 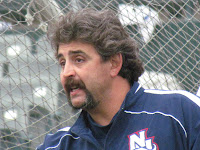 New Hampshire skipper Sal Fasano, who will manage the Eastern Division team was pleased with his clubs collection of players that were named to play in this year's exhibition match up in front of their home fans, especially his derby participating sluggers.

"McDade's had a heck of a first half," Fasano said in an exclusive interview. "He's probably been our most consistent hitter. He just keeps improving daily. It's fun to see him get a little bit of notoriety, because he's kind of worked his way into prospecthood. He wasn't a highly touted guy, but he keeps producing every year."

"Sierra, he's been hitting behind (McDade) for the whole year and so if they didn't pitch to 'Mac', then Mo made them pay," Fasano added. "Defensively he's been playing great too. He's been a pleasure, because he plays with such youthful enthusiasm. He really loves to play."

Other New Hampshire players honored as All-star were shortstop Adeiny Hechavarria, catcher Travis d'Arnaud as well as pitchers Henderson Alvarez and Joel Carreno. Additionally, righty pitcher Zach Stewart, who made a few starts at the big league level with the Blue Jays in June, was added to the Eastern Division roster last week to fill the spot of Alvarez, who will attend the event but will be unavailable to pitch.

Current Blue Jays that have played in the EL All-Star game include Travis Snider, Adam Lind and Aaron Hill.

Game time is 7:05 PM and the game can be heard on the Fisher Cats' radio home WGIR.

On Hechavarria, Fasano says: "Hech is about as good a shortstop as you'll ever see, probably in your lifetime. He's pretty good. He keeps learning how to hit. He's taking better passes and stuff.

Asked how close he thinks Hechavarria is to the Majors, Fasano said: "He could go to the big leagues tomorrow. I mean, he's that good defensively. It's just whether he could produce, or not, offensively. He's still got a lot to learn about the game, but the more games he plays, the better it is."

Fasano on Carreno: "Carreno had probably the worst four most miserable starts that you probably could have (to begin the season). His ERA was up at 9, he gave up a lot of homeruns- he gave up 8 homeruns in his first four starts. And if you take those four starts out of the equation, he's been unbelievable. He's just been outstanding, he gives us a chance to win every time out."

On Carreno's improvements: "For him, he got beat up enough that he finally put his foot down and said, 'No! That's it! I'm gonna learn to make an adjustment at this level.' And he did."

Fasano on Alvarez: "Henderson is probably our most highly touted pitching prospect and he's touched 101 (MPH) this season, so he's got some kind of arm."

Follow 1BlueJaysWay on Twitter for updates, stats and insight by clicking HERE.
Posted by Jay Floyd at 12:45 PM