So anyways, GC has a blog Snider's Web, a twitter account gcm1979 and some season tickets right above the other teams bullpen. As a result he gets invites to the offseason promo events. And he likes to spread the wealth around. 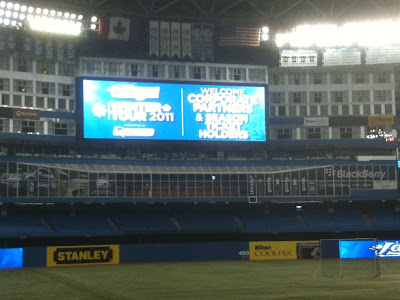 GC was looking for some wingmen for the Toronto leg of the Winter Caravan. Dustin Parkes of Getting Blanked and I were the only people to take him up on the offer. Previously I had a twitter fight with Parkes about the value of big money/lights out closers and walked away from that encounter figuring he was a douchebag. Unfortunately, after our brief face to face meeting I have nothing to update on that front. Meaning he's still a douche. Only now I'm relatively positive of that.

The plan was to meet at Hoops for a breakfast/beerfast at 10ish. I left my house in Guelph at 8:45 thinking that would be just about right. What I didn't consider was the fact that nobody seems to feel the need to plow the roads on a weekend. I arrived at destination just past 11.

We stroll in to a completely empty SkyDome. I mean empty. There was maybe 80 other idiots that braved the weather and made the trip. Mostly kids. Lotta kids. It felt a little like going to Canada's Wonderland. There was free food, free calendars and free hats. 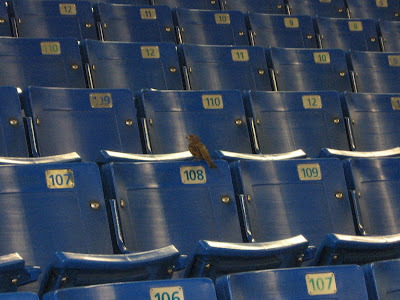 So we decide to sit down and watch the players take BP. In the cage was Travis Snider, Adam Lind and some right handed hitting black guy none of us recognized. I figured it was new guy Rajai Davis. Turns out I was right.

After BP ended and Parkes bounces without saying later the playing surface became available for all to walk around on, play catch and take some pics. After careful consideration, GC and I make our move. It was sorta cool wandering around the field and I took full advantage. 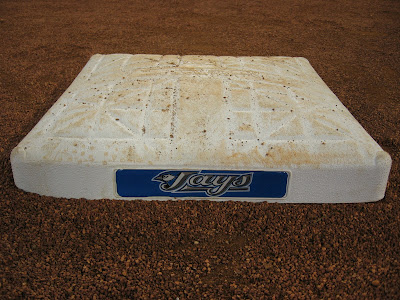 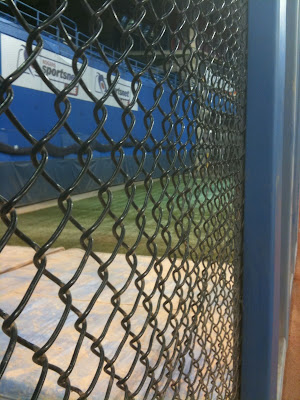 Was hoping to see Tallet but kinda glad I didn't 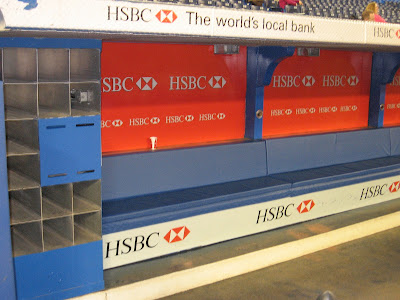 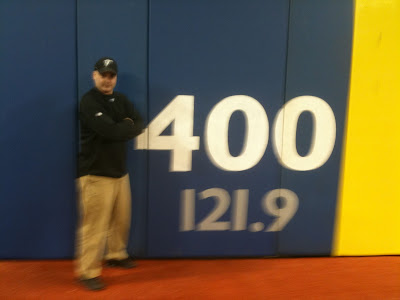 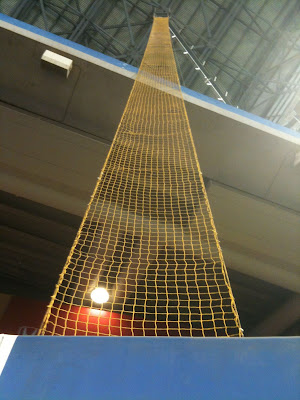 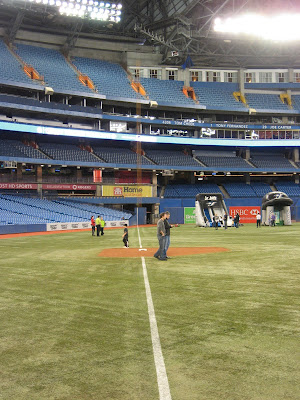 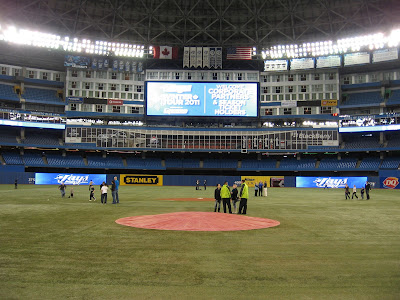 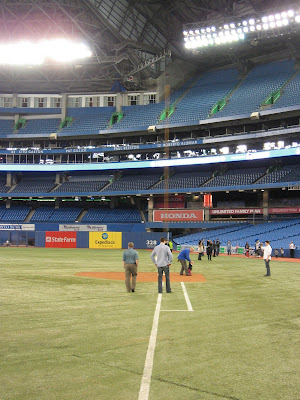 And finally, down the RF line

After everyone had had enough, two players come out of the clubhouse and sit down to sigh autographs. To everyone's surprise it was J.P. Arencibia and Travis Snider! They both seemed happy to be there, allowed people to take pics with them and engaged in conversation. I snagged a couple more signed balls for my now kinda getting ridiculous collection. 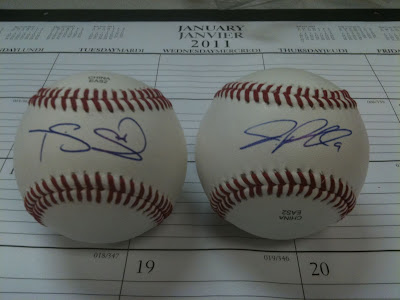 Standing in line I befriended one of the only other people there above 4 feet tall and we discussed the Marcum trade at great length. She seemed disappointed that her Shaun Shine left town..... 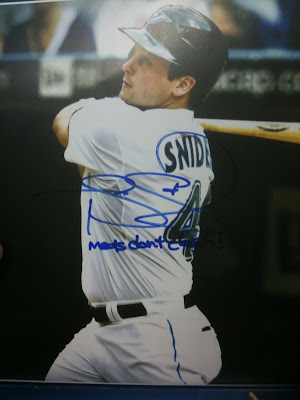 After seeing what she got autographed, me and GC figured it was none other than captainlatte herself.

Since we didn't meet up prior to the event for a beer, it only made sense to right that wrong once it was time to leave. GC suggested Real Sports and since I hadn't been there yet, I agreed. On the walk over he enlightened me on his 3 catcher roster theory with 1 guy DHing full time. I countered with my thoughts on the starting rotation and how service time will play a role going into 2011. GC mentioned that most of the ballplayers would probably be at the bar to watch the football playoffs.

One thing I will say about Real Sports is this: there is no way 2 beers and a hamburger should cost $40 plus. Massively huge big screen TV and smoking hot bartenders are nice and all but common now.....

When it's time to go our separate ways, we decide to have a quick smoke break out front of the bar in the freezing cold. Halfway done who do we see walking down the sidewalk, head down and looking bored? None other than Adam Lind. I had a ball/pen out in record time and asked politely for an autograph. He declined. Which is fine. I guess. But it's how he declined, totally ignoring us, that kinda pissed me off. No matter, I guess he was too busy being unnoticed.

Example 2: State of the Franchise 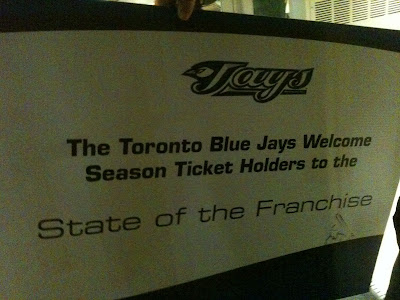 Disclaimer: I am not a season ticket holder. Just know a guy.

GC mentioned that he would try to score me an extra pass into the State of the Franchise and he came through big time. This time I vowed not to be late. The meeting spot was the Loose Moose at 5:30 and I nailed it. A quick warm up pint and we stroll in the doors just after 6. We are greeted with a coat check and a pamphlet containing a bunch of info on the team and the new player and staff acquisitions. But the best was yet to come. FREE BEER. That`s right. You read that right. The cheap bastards @ Rogers finally ponied up. There was also free food and 40% off merchandise. After some internal debate I scored a black Kyle Drabek jersey. The logic on that one was since we didn't deal him for Grienke he's probably sticking around a while.

So I literally just walked around and ate and drank and then ate and drank some more. The house was packed with VIP's. BJH was holding it down with digital audio recorder in hand. Captain Latte made an appearance once again. There was a Fake Cito Gaston sighting. Also in the house was powder_blue, highsockmojo, spookylish, tbettz and jamiedewu just to name a few. I'm sure I missed someone. Point being: the place was packed with Blue Jays faithful not to mention every damn beat reporter you can think of.

After the meet and greet was over, we take our seats and buckle up for a guaranteed love in. Second row bitches! 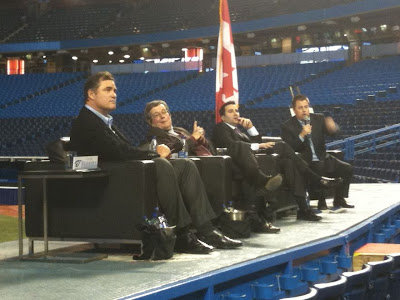 If you are looking for some info on the event, just go visit The Blue Jay Hunter. He's got it all for ya. I must mention Robbie Alomar had a rocking quote that I didn't see in any of the other recaps. Check it:

"Alex is the kind of General Manager that brings me back memories with Pat Gillick. He's a work alcoholic, he's addicted. It's like drugs!"

After it's all said and done (we get told to leave nicely) a pack of drunk people head back to the Loose Moose for a nightcap or six. It was there I was introduced to the Bautista bomb. 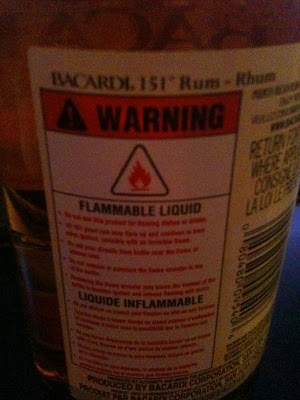 which is dropped in the Red Bull and downed. Yikes. GC does one of these "shots" after the game for every J-Bau home run at the Dome.

Needless to say I recall very little else from that night but I'm certain I enjoyed every minute of it.

Rolling with GC works just fine with me.

Posted by The Man With The Golden Arm at 3:14 PM

Labels: cheap bastards at Rogers, J-Bau, We like balls that are signed