All Hail The King! 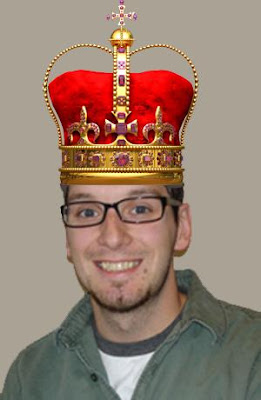 Say what you will about our perspective(s) on your Toronto Blue Jays but one thing we can do, is keep a secret.

Take a look at an exclusive Twitter interview via DM with the man, on the second last day of the season:

1BJW: Are you leaving us at the end of this year sir?

JB: What's the word on the street?

1BJW: Nobody is talking about it except that jerk that was saying you were going to cover the Tribe. I'm not asking 4 a scoop.

1BJW: I just wanted to say thank you and good bye, that's all.

JB: between you and I, I'm covering CLE next year for mlb.com. moving closer to home for the fam. thanks for all the kind words the last few years.


1BJW: I'm happy for you! Thanks 4 your great work over the years. I will do up a post and have it ready whenever u make the announcement.

It's a sad, sad day in Blue Jay land.

The King has moved on.

I feel I can speak for everyone when I say Jordan Bastian will genuinely be missed in these parts.

Now, I don't need to sit here and tell you how hard JB works at his craft. You should fully appreciate that by now.

He always asked the tough questions and yet somehow found a way to be impartial. His work is clear and concise, leaving little doubt what the story was after he tackled it.

I commend him for somehow finding a balance between covering a pro team and raising a young child in a foreign country. Either of those jobs is difficult enough on their own.

On a personal level, Jordan was always accessible to the Blue Jays faithful. He had to remind us every now and then that he was in fact a journalist, not a fan. It's fair to say most of us felt that he was our voice, it's like we could in someway relate to him, which is one of the highest compliments a reporter can receive from their readers.

I asked the other contributors of this blog for some thoughts on King Jordan and his time here with the team.

LastRow500's: I had the pleasure of meeting Jordan in Dunedin, shortly after he shared his blog entry on coming to Canada and became aware of 1BlueJaysWay's full time employer. When I introduced myself as from "said employer" and/or 1BlueJaysWay, he didn't seem too interested, but still shook my hand and engaged in a brief conversation about the upcoming (and about to be rained out) game vs. the Red Sox' travel squad. Proudly wearing his green Spartans hat he thanked me for my time and went on his way, no doubt to train for the upcoming #Dotcomdash in Port Charlotte.

He recently took the time to answer and publish a question of mine in an edition of Jays Inbox. Always in touch with the fans and always sharing his love of baseball combined with his journalistic skill, the Blue Jays became popular again, thanks in no small part to his contributions.

Many thanks Jordan for your passion and unwavering commitment to getting the Jays' story out, thanks to your consistent and timely, if not humorous tweets. You truly are a credit to helping re-energize the fan base in Blue Jays nation.

Good luck in Cleveland. You'll need it!!!
Say hi to Howard The Duck!

Jesse, Lugnuts: I'll definitely pass along best wishes and highest regards, then. He'll be missed, both in the quality of his work and the quantity of his coverage.

The Human Rain Delay: It's sad to have him move on to the Indians, but it was great to have him here. His blog was something I checked everyday, and his articles on the Jays website were must reads. He also managed to come in and out of my workplace often, due to some past issues. 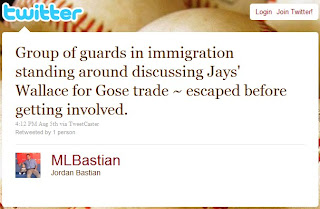 He's was right, we definitely would have cornered him and asked him a million questions about the trade. All the best Jordan, the Indians will be lucky to have you cover them.

Nemesis Enforcer: When I first read the email from Golden Arm that Jordan was moving on, my first thought was sadness.

I've read his blog only a few times and I've never met the man, but from what I saw on Twitter it would certainly seem like he'll be missed by many a fan. The back and forth between Jordan and the fans was truly something great, other reporters talk to the fans, but they're usually just bitter and do a lot of yelling. People respected Bastian and he respected the fans, he seems like the kind of man that didn't take his job too seriously and was a genuine ball fan. He had fun doing what might be one of the coolest jobs in the game.

He'll be missed by many. Enjoy your time in Cleveland, you thought Toronto was cold, just you wait.

jaysaremy2ndfavoriteteam: He was very willing to speak his mind and his thoughts held weight. King Jordan wrote from his heart and wasn't afraid to leave his heart in his work. He was always a source for meaningful and insightful information regarding your Toronto Blue Jays. He will be missed and best of luck to him in his future endeavors. I know that whatever he chooses to do, he will do it with grace and an insightful pen and mind.

SPANdemonium: There's nothing more "Blue Jays like" than waking up in the morning and reading a tweet from @MLBastian regarding our beloved Jays. So I thank you Jordan for everything you did for this organization and the impact that you had on us fans. Wish you the best in Cleveland!

We urge you to take a moment out of your busy day and thank him for all his efforts over the years.

Posted by The Man With The Golden Arm at 2:20 PM