Let me get this out there, I love Rajai Davis from his A's days (no rhyme intended but thank you) and am extremely excited to have him on board for the '11 season. But by no means do I think he and his .330 career OBP are worth Trystan Magnuson and Danny Farquhar. I will say this, I'm really excited about the Rajai era. 50 SB's looks good even with a .300 OBP. Furthermore, I know Rajai personally, live near him, and he has some really cool friends who I know, and I can't wait to see him come April 28th at Yankee Stadium (remember guys, I hate the Yankees, I just live in NY).

So here's the thing, a huge reason why the Fisher Cats were so good in '10 was because of their core 4 bullpen. Those 4 would be Tim Collins, Trystan Magnuson, Danny Farquhar, and Alan Farina. It's clear that Alex Anthopoulos doesn't like me, which is why he's trading my boys away.

But seriously, these 4 were pretty darn good and if you take a look at Ryan Madson, Nick Masset, Mike Adams and Ryan Perry just to name a few, actually four, they all have one thing in common; they are their respective teams "go to guy." Well Trystan was that guy for the Fisher Cats this season and I envisioned him as that guy for the Jays. He always seemed to get the call to relieve Drabek and Stewart's awesome performances, and by that time the game was over. He doesn't throw hard at all but has pin point location with his fastball which is why he was so dominant.

Farquhar, as little and diminutive as he was, had the best stuff on the team after Collins was gone. He too, didn't light up the gun, but got every out and K when he needed it. He had 79 K's in 76 IP's, hence another reason for his dominance.

To me these two guys were more than just relievers who got our guys a win. Trystan is a great guy and someone who I will miss. I would obviously miss him as much if/when he got promoted to a higher level, but it's not a good feeling knowing that sometime in the future when the A's come to Rogers Centre, he will be pitching "to" the Jays, instead of pitching "for" the Jays. We had some fun moments and he was definitely a fan favorite of all and everyone who knew anything about the Fisher Cats and Merchantsauto.com park. 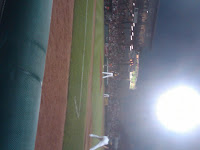 I wish the duo nothing but the best, and can't wait to see them pitch for the A's. I'll try to get a hug or two when I travel to Arizona (obviously after Dunedin) in March, but we did get Rajai who in my opinion, will be a good weapon for the Jays. For that matter I'm happy about the trade, but am certainly going to miss both Trystan and Danny.

Good luck fellas!
Posted by SPANdemonium at 7:06 AM