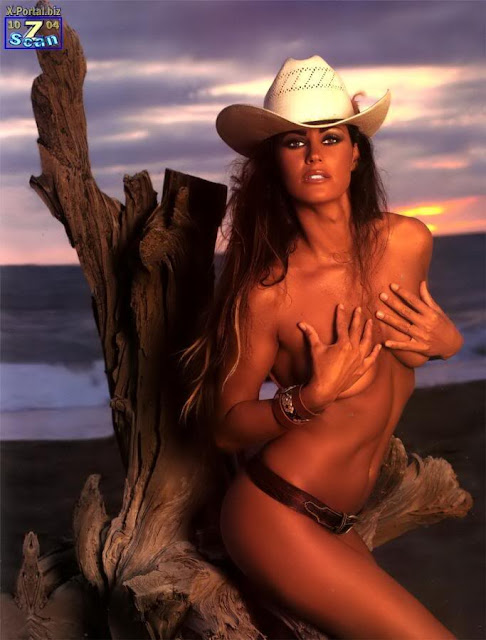 
Consider this your required viewing for the week.

“Kyle certainly deserves it,” Anthopoulos said. “He had a great year. His last start was outstanding. It was important for us for him to pitch in a playoff atmosphere. He did a great job. He did everything we asked, and his innings total is pretty much identical to what it was last year.”
Drabek’s first outing will come Wednesday in place of Brett Cecil, whose start has been pushed back to Friday in Boston.
According the current rotation schedule, Drabek would make his home debut Sept. 22 against Seattle and his final start, again at home, against the New York Yankees on Sept. 28.


It's been confirmed that this game will only be shown on SportsNet One. Now that REALLY sucks for those that can't get the channel. Look for this hashtag to explode: #StupidSportsnetOne

Courtesy of Damien "Suck My" Cox:

The confusing part is that with Paul Beeston back in charge, the disliked J.P. Ricciardi gone, a local boy running the front office and an appealing youth movement, it was expected this would the year GTA baseball fans began to feel more enthusiastic about the team.
Instead, attendance suggests the Jays are less popular now than they were last year, and definitely from three or four years ago.
'Tis a puzzlement.
Wtih Jose Bautista swatting homers at a major league-leading pace, an impressive young pitching staff featuring Brandon Morrow and some exciting prospects on the way, one might have thought there was an opportunity at hand for the Jays to recover some lost ground, not lose more. Generally speaking, local media types have approved of the direction of the team, some suggesting this has been nearly a triumphant season despite a record just about .500. Moreover, its not like any of the other pro teams in town are producing championship-quality teams.
So what's the reason behind the drop? Well, the stadium, of course. The Rogers TV issues haven't helped. Having a caretaker manager doesn't exactly get the masses excited. And, as has been the case for a long, long time, no meaningful games in August, let alone September, kills interest. Playing in the tough American League East continues to be an issue, although another competitive season from low payroll Tampa Bay is gradually taking away the division in which the Jays play as a meaningful excuse.
The season began with some shockingly low numbers, but then there was some recovery. Now, it seems the season may end on a low, which has to leave the Jays thoroughly puzzled as to what it will take - if anything - to bring the people back.


This guy needs to stop writing about baseball. Seriously.

Pettitte isn't that great a prospect, as he's old for the level, but New Hampshire starter Zach Stewart was extremely impressive in his seven innings of work, striking out 10 (also against a weak lineup) with just one walk and ten groundouts against just one air out.
Stewart showed four pitches, pitching at 90-96 with sink and some tail with a tight, out-pitch slider at 83-87 that he threw for strikes, even back-dooring it to left-handed hitters for called strikes. His changeup was the biggest surprise, as another scout at the game told me he hadn't seen it this good before; it's mostly straight but has good separation from the fastball at 81-85 and his arm speed is excellent. He also used a fringy curveball with good depth, but he didn't command the pitch as well as he did the slider.
Stewart worked aggressively with everything and had good tempo. He stays over the rubber before driving forward with a long stride, although his arm action is a little long in the back and he pronates relatively late in the delivery. I know several scouts see Stewart as a sinker/slider pen guy, but I see four pitches, a good frame, and a pitcher who likes to attack hitters, and I see a potential No. 2 starter, maybe a No. 3 if the changeup isn't always where it was tonight.


Klaw had something positive to say about your Toronto Blue Jays. Seriously.

Asked whether he wants to succeed his old friend Cito Gaston as manager of the Toronto Blue Jays, Nick Leyva does not hesitate.

"They know I'm interested," he says. "Why wouldn't I be? This organization is going in the right direction. You have a young, aggressive general manager. He's got a plan. You'd be foolish if you didn't want to be part of that."
The general manager, widely credited with Midas-like qualities in his rookie year, is Alex Anthopoulos, now deeply engaged in his next big decision: culling a long list of contestants for the job Gaston will vacate at season's end.

A team bursting with impact prospects will represent the United States at the 2010 Pan American Qualifying tournament in San Juan, Puerto Rico. The team will scrimmage Sept. 25-28 at USA Baseball's National Training Center against teams from Puerto Rico and Canada, then plays in the tournament Oct. 1-10. The event serves as a qualifier for the 2011 Pan Am Games, with the top eight teams earning entry, and the top six teams also qualify for the 2011 IBAF Baseball World Cup.


Brian Jeroloman gets the call to represent his country. Great honour for him. I see him as our AAA starting catcher next season with d'Arnaud, Jimenez and Perez breathing down his neck.

Dunedin Blue Jays closer Matt Daly joined fellow pitcher Joel Carreno as a Dunedin record-breaker in 2010, setting new single-season marks for both saves and appearances in the D-Jays' 4-3 win over Tampa on Saturday.
Daly, 24, notched his 31st save in his 56th appearance, breaking Connor Falkenbach's save mark from 2007 and Ben Weber's appearance mark from 1993.
Falkenbach's saves record was the most recent record set by a Blue Jays player, and with both Daly and Carreno breaking records in 2010, they became the first D-Jays duo to accomplish that feat since pitchers Cameron Reimers (hit-by-pitches) and Aaron Dean (earned runs) did the deed in 2001.
The 13th round draft pick in 2008 out of the University of Hawaii has had a stellar 2010 campaign, going 2-2 with a 2.50 ERA and holding opposing hitters to a .214 batting average. His 31 saves came in 33 chances, a remarkable 94% save rate. He also struck out 63 in 57 2/3 innings. He was named a first-half Florida State League All-Star, as well, pitching in the FSL All-Star Game back on June 12.
Daly now has 56 saves in his three seasons with the Blue Jays organization and 32 overall with Dunedin, having notched a save during a late-season call-up in 2009.

Straight rip of a press release. Looking forward to seeing how Matt does in the AFL.

Bautista opened the year as the leadoff hitter, later batting sixth and seventh before his burgeoning power production prompted manager Cito Gaston to install him in the No. 3 slot on June 24.

So I had this thought. Why not put J-Bau in the clean up spot next year? Move Vernon to the 5 hole and bring Lind back up to the 3 hole. I'm kinda getting tired of seeing Esco take the bat out of J-Bau's hands.

Toronto Police have turned over documents removed from Toronto Blue Jays offices to U.S. authorities in connection with the perjury case against seven-time Cy Young winning pitcher Roger Clemens.
Two Toronto officers executed the search in June, an Associated Press report said, and assisted the U.S. Justice Department by forwarding two boxes they obtained, according to Toronto police spokesman Constable Tony Vella. The police spokesman would not say whether the documents were medical records.
The Blue Jays are maintaining silence on the Clemens matter. Blue Jays physician Dr. Ron Taylor said through an associate “he did not know under what circumstances the documents were obtained and will make no comments,” while Blue Jays spokesman Jay Stenhouse said the club will not comment “about matters pending before courts, other than to confirm that it is our policy to comply with all valid legal process.”
Jays president Paul Beeston did not reply to a phone message seeking his comment.

He is still the very best pitcher I have ever seen in person. Check out his numbers as a Blue Jay. Fucking insane. 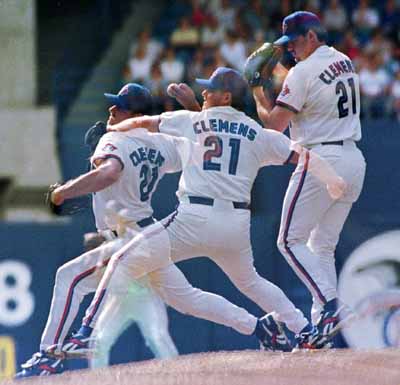 But I do know Anthopoulos is a smart guy, and I know that smart, first-year general managers pick their spots. You can’t take over as GM of a team managed by someone with Cito Gaston’s track record knowing that your boss – president and chief executive officer Paul Beeston – wants a comfortable exit for the guy who helped bring the city two World Series titles. You can’t fight bitterly for every inch of your turf, not when you know that Beeston stared down the players during last year’s September clubhouse revolt. So you save your powder, knowing you are just weeks away from making your franchise’s most important managerial hire since Gaston was fired.
When you are asked about Snider’s handling, if you are Anthopoulos, you point to his age: 22. You point to nine home runs in 222 at-bats, shrug and say, essentially, “could be worse.” J.P. Arencibia’s lack of playing time? “No,” you would say, “John Buck was an American League all-star."


I have been meaning to post about The Cito for a while now. I am suppressing the anger. It's becoming un-healthy.

“It’s more about the opportunity I have to pick these guys brains as much as possible and watch games on a closer level,” Arencibia said. “Watch the hitters, watch what’s going on. Sitting in on the catcher-pitcher meetings before games and stuff like that. That’s the way I’m going to have to learn.”
Arencibia has a lot to learn. Following his fabulous August debut, he caught sporadically and when he did, pitchers struggled. He must improve his pitch-calling and his understanding of the major-leagues. He must form relationships with the pitchers he will work with next year. He needs to play.
Even if the Jays plan on re-signing Buck, especially if the Jays plan on re-signing Buck, they could easily ease his workload in September and it wouldn’t hurt him. As for Arencibia, following his second straight successful season at Triple-A he was asked if he was ready for the majors.
“I’m the Pacific Coast League MVP,” Arencibia said with quiet confidence.

You Don't Know Dick absolutely nails it. Why not play the kid? What the fuck do we owe the Skankees or Tampa Gay?

Posted by The Man With The Golden Arm at 8:23 PM