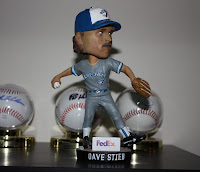 August 29th 2010, your Toronto Blue Jays commemorated the first and only no-hitter in franchise history by giving away Dave Stieb bobblehead dolls to the first 10,000 lucky fans at the Sky Dome. On September 2nd 1990, David Andrew Stieb and his intense mustache no-hit the Cleveland Indians in Cleveland at the old Municipal Stadium along the shore lines of Lake Erie. The Man With The Golden Arm and I attended this August 29th game against the Detroit Tigers, even going as far as getting to the Dome early - as in 10am early - to get us a shiny new bobblehead doll. We were meeting up with a few friends who had zero interest in procuring a bobblehead, and most likely would be arriving to the Dome a tad late. Golden Arm and I invested in some "lost leader" tickets, the tickets you buy to gain access to the stadium, claim your bounty, and exit with plenty of time to spare and pick up the regular tickets. We purchased some 500 level seats, entered the facility, got the bobblehead, watched a little BP, caught a nasty change up in the right field bullpen seats from Marcum and left to get something to eat.

On Sunday September 2nd 1990, I was lucky enough to be attendance on this historical day. Check the ticket stub above, that's the real deal folks. I was traveling with my minor Pee Wee Bloor Jays baseball team for a tournament in Cleveland and Akron Ohio. We were playing a bunch of Pee Wee aged teams from the state of Ohio and Pennsylvania, which included us playing at Jim Leyland park in Ohio somewhere. The team planned this trip around the Toronto Blue Jays schedule, giving us 12 year olds the chance to see our beloved Blue Jays outside of our own city. We stayed at the Renaissance Cleveland Hotel downtown, around a 20 minute walk from the stadium.

Of course, as 12 years olds, who were all wearing our Bloor Jays jerseys, we waited around the park to see if we could catch a glimpse of some of the Blue Jays players. We stayed around the gates of the stadium and managed to meet players such as Pat Borders, Glenallen Hill and Manny Lee. But, what I remember most was meeting George Bell, who as I recall, would only sign an autograph from me and my friends after hearing we were from Toronto. We ended up staying at the same hotel as the Jays so we got to walk from the stadium to the hotel with some of them. George Bell had a beautiful blonde woman with him, as well as at least 3 very expensive gold watches on his wrists. The Bloor Jays saw the entire 3 games series including the Sunday afternoon contest. 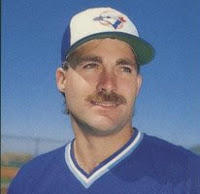 Dave Stieb was arguably out best pitcher in the 1980's and early 90's. He was born July 22, 1957 and was scouted and drafted as an outfielder by legendary Jays scout Bobby Mattick. After drafting Stieb the Jays converted him into a pitcher. He spent 15 seasons with the club and holds many franchise records including wins (175), innings pitched (2,873) and strikeouts (1,658) and even has his name and number affixed to the exclusive Blue Jays Level of Excellence at the Sky Dome.

On September 2nd 1990 he was pitching in Cleveland carrying a 16-5 record for the AL East's second place Toronto Blue Jays against Cleveland Indians starter Bud Black who was 10-8. Game time was 1:35pm and the Bloor Jays were in the General Admission seats in the upper tank. I remember sitting on the first base side around 20 rows up and there was a wall behind us, separating the sections. I remember a foul ball off the bat of Manny Lee rocketed towards my seat as I was leaning forward to talk to a teammate. It hit the wall hard and bounced back and hit me right in the shoulder blade. This was my first foul ball catch, even if my shoulder made the catch. I remember the Cleveland Indians were not a powerhouse by any stretch, and after looking back at the box score from that game, only 2 names jump out at you - Carlos Baerga and Cory Snyder - everyone else, I don't really remember. Mookie Wilson in the line-up as the DH lead off for the Blue Birds, followed by Tony Fernandez, Kelly Gruber and Fred McGriff, who would hit 2 home runs this day. But the day belonged to Stieb, he struck out 9 and walked 4. He was helped out by his catcher as Pat Borders threw out both Alex Cole and Carlos Baerga trying to steal second base. He had a couple of previous no-hit bids broken up in the ninth, but he would not be denied this time. He induced a routine fly ball from "The Governor" Jerome Browne, the Indians second baseman that found the glove of Junior Felix. Stieb's line:

The first and only no-hitter in Blue Jays history, happened 20 years ago, and I was lucky enough to be there. When I think Dave Stieb, I think of a couple things. That nasty slider, the intense mustache and the crotch grab after virtually every pitch. But I think this game above all else is what he'll be remembered for.

Posted by The Human Rain Delay at 5:02 PM