It's been a while since I let it out.  The hate in my heart, that is.  This should be therapeutic in some twisted way......

Consider this prerequisite reading before you continue.

Now as you can see, I have written about Keith Law in the past.  And it's fair to say they were less than glowing reports.  Generally, I listen to what he says then look at it from the exact opposite perspective:

Fuck Klaw. If he doesn't like it, then i like it even more..... RT @drunkjaysfans: @GloBlair Yeah, he thinks Jays got hosed. #jays #bluejays

Pussy RT @keithlaw: I hate home plate collisions. If I wanted to see one grown man try to knock another over, I'd watch football.

I was completely fine with leaving it at that.  I really was, until last night I wrote this in response to one of his tweets to a fellow Jays fan:

DICK RT @keithlaw: I'm sorry, did I hurt your widdle feewings? RT @ChrisArnold33 would it kill you to tweet something nice about the #jays?

That seemed to anger Klaw.  As you can see, I have called him worst things in the past.

So he drops by the site:

And sends me this e-mail:

Very classy. Some idiot whines to me about bias after I agree with criticism of Cito's handling of Snider, so I call the guy out for whining, and you resort to profanity against me? Seriously?

So I decide to let the people know about it:

Heyo! @keithlaw just sent me an email after I called him a dick 4 being a dick 2 @ChrisArnold33 Should I post it? Yes or No #jays #bluejays

And the response was overwhelming:

@1bluejaysway Absolutely post it. He was out of line being such a, well, 'dick'. Could've answered that guys frustration a little better...

Yes! His writing = sodden + irrelevant #lessontousall rt @1bluejaysway Heyo! @keithlaw sent me an email... @ChrisArnold33 Should I post it?

@1bluejaysway yes yes you should. Man all I asked was he say something positive for once. He even criticized Jayas after Morrow's one hitter

The last one being from the one and only @ChrisArnold33 himself.  I got him to send me over the conversation for reference.  Here it is in it's entirety:

@keithlaw would it kill you to tweet something nice about the #bluejays ? Even after Morrow's 1 hitter you bitched he was out too long

I'm sorry, did I hurt your widdle feewings? RT@ChrisArnold33 @keithlaw would it kill you to tweet something nice about the #bluejays ?

@keithlaw wow I thought you were a pro. Sad. Just pointing out a fact of you being bias. And I know I'm not alone.

@ChrisArnold33 No, you are not alone in your ignorance. Watch the news some time - you'll feel right at home

@keithlaw I have enough MLB reporters on here and you're the only one that tweets one positive per 10 negative Jays posts.

@keithlaw forgot that its 'cool' these days to shit on Toronto. At least for you anyways.

After reading that exchange I decided to do a little research on Klaw.  Here are the results:
On the turn of a moment, Gemini can become cynical, biting, moody and quickly angered. Inseparable as two sides of a coin, those born in this sign can be dazzling and irresistible or inconstant and irrational.

His titles when he was with your Toronto Blue Jays included:
There are a lot of other people that have a "dislike" for Keith.  The highlights:
Considering Klaw has a vote on who wins the major awards in baseball every year I think we can all take these honors a little less seriously in the future.  The Baseball Writers Association of America denied him into the club once, only to admit him a year later.  Think they regret that decision at all?

After determining that Klaw is a Gemini, his behavior makes a little more sense.  He actually has a split personality and cannot control himself.  On one hand you have the extremely smart stat junkie that talked his way into the baseball industry and on the other you have the little bitch that sends silly e-mails and tweets.

I'll send it over to Silky Johnson for his insightful take on Klaw.  Hit it Silk. 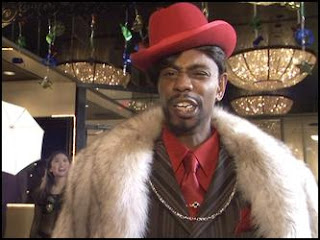 That was Beautiful. On the weekends, Beautiful does stunts for Little Richard in gay movies.
Posted by The Man With The Golden Arm at 11:55 PM