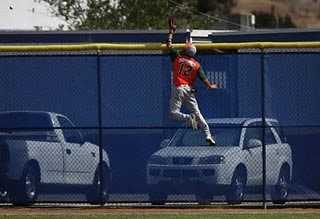 LANSING, Mich. – The Lansing Lugnuts, in conjunction with the Toronto Blue Jays, announced Sunday that outfielder Jake Marisnick has been received from the GCL Blue Jays (Rookie – Gulf Coast League) while infielder Randy Schwartz has been placed on the 7-day Disabled List retroactive to July 30th.

Navin over at Sports And The City did a nice piece on him last year.  You should definitely check it out.

His Minor League numbers look a little something like this:


That's it.  A month and 10 days of pro baseball and he's moving up the ladder already.

If you've been following him on Twitter then you will already know that the brain trust held him back for a couple of months in an extended spring training.  Then they decided to turn him loose in Rookie Ball.  It's hard to judge him on such a small sample size so.....enter our boy Jesse.  He will be watching Jake rather closely from the broadcast booth and I have already requested an interview.

In his first game with Lansing playing CF and hitting 7th, Jake went 2 for 3 with a double and 2 RBI, one of which came with 2 out.

You will not be able to take a look at this scouting report from last year without touching yourself.
Posted by The Man With The Golden Arm at 2:36 AM