Game 109 Recap: Live And In Effect 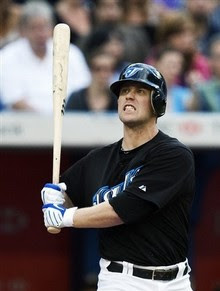 So LastRow500's decided to quit slummin' it last night, and head on down to the 'Dome to take in the Jays and Rays.  Matt Garza (11-6) fresh of spinning a no-hitter was on the bump against the Jays' Brett Cecil (9-5).  I had hoped to catch the MLB debut of J.P. Arencibia but The Cito held him out of the line up.

My 2nd row Jays' dugout seats provided a fantastic view point of the unfolding events of the night.

Here are my observations.

First, the good:  Brett Cecil plain dealing!  Recovering from a 3 hit 1 ER first to shut down the Rays offence, over 7 IP allowing only the 1 ER over 4 hits, and 9 K's. Stranding 5 Tampa Runners including grinding out a tough 5th inning that featured a leadoff walk to Upton, and a single to Sean Rodriguez.  A double play courtesy of Evan Longoria eased the stress a bit, until Willy Aybar walked to put runners at 1st and 3rd.  With Ben Zobrist at the plate, Cecil reached back for a 94mph fastball that Zobrist is still looking for to K and end the threat.  An uneventful 8th and 9th courtesy of Camp and Gregg sealed the deal.

The Bad: Really tough for me to find anything bad in a Jays' win, but if I had to choose, Garza stymied the Jays' bats all night showing his no-hitter form early and often.

The Ugly: The Rays' defense. 2 errors lead to 2 un-earned runs.  Despite a 8IP complete game, with no ER's, Garza proved to be the hard luck loser.
The continued struggles of Aaron Hill. From my vantage point, he looked plain over matched.  Credit Garza, but Hill looked behind on a couple of mis-hit, lazy fly balls to RF.

Today's matchup features Brad Mills fresh on a recall from AAA Las Vegas (1-0) against James Shields (10-9).  The much anticipated debut of J.P. Arencibia is slated for todays game.
Posted by The Man With The Golden Arm at 11:45 AM