Game 55 Recap: Live And In Effect 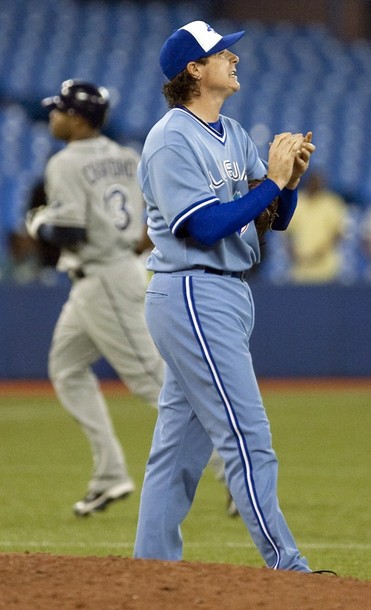 So I had this great idea.  Why not go to a Blue Jays game?  Two great starters on the hill in Marcum and Price in a rubber match.  I made a few calls to the boys, The Human Rain Delay and Jimmy Triggs were feeling it so it was on.  Spontaneous Jays game.

What we saw was a game filled with missed opportunities and miscues by both teams.  Fittingly, it ended with a grand slam by the visiting team on a mistake and the crowd went home disappointed.  We decided to stay and watch the final outs, me with my hat turned inside out.

Now I know that most will hang this loss on the manager.  And I dislike him as much as the next guy.  Probably more.  But on the ride home I found myself replaying that fateful ninth inning back, wondering what he could have done different.  And you know what I came up with.  Nothing.

He let his staff leader go out and try to finish off the game and even had the double barreled action up in the pen just in case.  After two well hit singles, the argument could be made that a pitching change was needed.  But Marcum had been wiggling his way out of trouble very well this game.  And he was able to get the groundball he was looking for, it was just not hit hard enough to turn the double play.  And if Overbay makes that play on the bunt, we probably win the game.

Point being: these games are bound to happen over a 162 game schedule.  They hurt.  They demoralize.  But what they do not mean is we are falling apart.  In a rare moment, I will try to look at the positives.  And there are many to take out of this game as well as this series folks.

Your Toronto Blue Jays can play competitive baseball with anyone.  That's right.  I said it.  I think this team is for real.  We entered the ninth inning of each of these games with the lead against the best team record wise in the entire Major Leagues.  That's a huge lift for the confidence of the players.  More times than not that means we are going to win the game.  We just didn't get it done this time around.  You know what the best part about it is?  We get another shot at these lucky bastards next week.

Lick your wounds on the off day everyone and get ready for the Evil Empire.
Posted by The Man With The Golden Arm at 1:29 AM