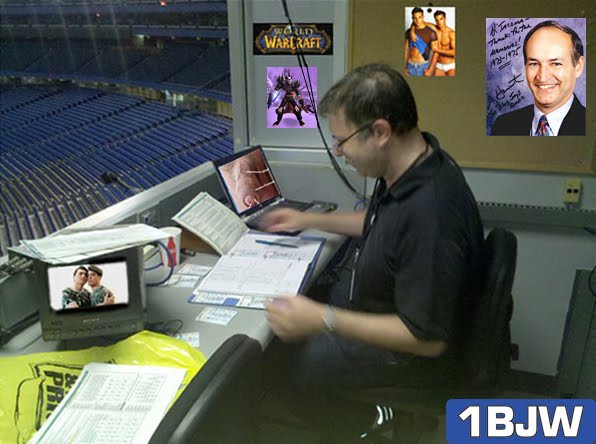 If you noticed, and judging by the daily hits on sitemeter you have not, we missed last month's edition of hate.  Fittingly, we saved up and decided to unload an extra helping on Mike Wilner.  Anybody that has called in to Jays Talk has more than likely been trashed by this "expert".  Friend of the site, Mr. Ike Stake, called in after a game early last year and asked simply if Travis Snider was going to get some at bats against left handed pitching.  It was the first question of the night and dickhead Wilner made sure to set the tone for the show by stating: First of all it's Snider, not Snider.  He then went on to rant about how Snider couldn't hit lefties and should be happy with a platoon role to start his career.  He then cut Ike off without giving him an opportunity to respond.  Typical Wilner.

In all fairness, most of the calls he receives are from idiots.  And I guess if I was in his chair, I would get a little tired of it to.  But Mike, we don't call you for a fucking English lesson and quite frankly you are not schooled in either the language, sports broadcasting of even journalism for that matter.  You have a degree in psychology remember?

Here is a quote from Mike:

"I played youth softball growing up, and played league baseball for six or seven years at Bond Park and Sentinel. I caught a no-hitter once, and once threw out five guys on the bases in a League Championship game -- those were the highlights."

Good for you sir.  You played softball and league (not rep) baseball growing up.  Guess that qualifies as baseball experience.  I once played tee ball and have a degree in underwater bingo, can I get on the radio please?

So just how did Wilner get on the radio anyways?

It all started back in 1988 while he was still at the U of T learning to understand the role of mental functions in individual and social behavior.  He got a gig at CIUT, a campus and community radio station found @ 89.5 on the FM dial.  Within a year, he was anointed the title of sports director.  He also worked for Toronto’s Cable 10, where he hosted a show "Let's Talk Sports" from 1989 to 1995.  He then took a job in 1995 with 680 NEWS covering sports for them.  In 2001 he jumped over to the Fan 590 to cover baseball for them.  Mix in a little minor league play by play for the Welland Pirates, Watertown Indians and Hardware City Rock Cats and what do you have?  Experience.....I guess.

That's what is says on paper.  What it doesn't say is how he got the job.  I'll bet his friend Keith Law had something to do with it.  Let's look at the facts:
You get what I'm laying down?

Wilner says: "I just got lucky, and worked from there."  Sure you did Mike.  Your friend got you the job, that's not luck.  The least you can do is admit it.

Wilner is quick to point out that he does not actually work for the Jays.  His paycheck comes from the Fan 590, which is part of the Rogers Media umbrella.  Rogers Media is a subsidiary of Rogers Communications.

Question: Who owns the Blue Jays, the SkyDome, Sportsnet and the Fan 590?
Answer: Wilner is full of shit.

We here at 1BlueJaysWay always take our heckling to the next level.  Always.  So here is a bit of personal info on Wilner.  I must say, he is a very private man but that just makes the search more challenging.....and we like that!

His full name is Michael Samuel Wilner.
He is born in 1970 not 1969 as it is reported.
He is a Pisces.  Which is a fish.  Some of the bad traits of that sign are as follows.  Tell me if any of these sound familiar:
He grew up in the Bathurst and Steeles area.
He is a Jew.  He said it, I'm just relaying the message.
He resides in Mississauga.
He has a mail order bride from Argentina.
He has two daughters.
He enjoys dice based fantasy baseball games, specifically Dynasty League Baseball.
He has a face for radio.
He has a weakness for the brilliant and cheesy music of the 1980s.
He really hates it when you call him the voice of the Blue Jays or when you pronounce a players name wrong.  So you know what to do next time you get through now.....

Samuel Wilner, as he will now be known in these parts, will be on hand June 17th in St. Marys @ 7pm to play in a "celebrity" slopitch game.  I guarantee this chump has zero game.  So much so, that I will call on my childhood friend to take some pictures of his performance and demand that they are exclusive to us here at 1BlueJaysWay.  Stay tuned.

If you want a chance to spike him breaking up the double play or perhaps go elbows up, you can buy some tickets for a draw to play in the game.  I think it would be a fucking awesome idea to pool some money together and buy out the rest of the tickets.  Then we find the biggest ex football player / juice monkey in southern Ontario, jack him up with some Red Bulls and teach him how to "play the right way".  Just a thought.  Who is with me? 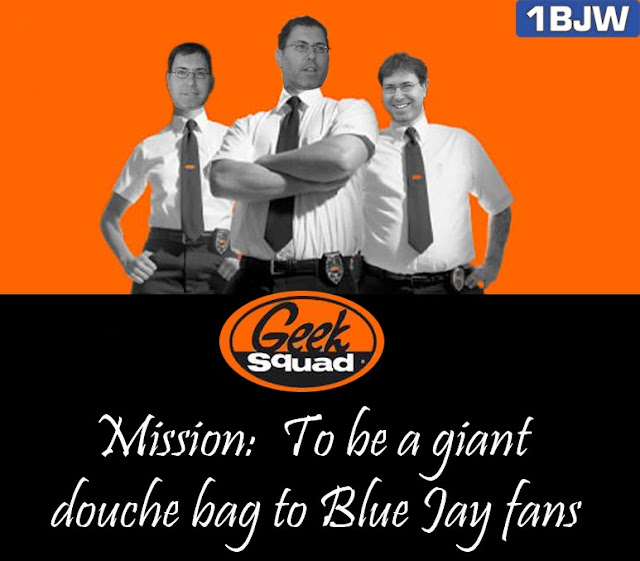 In closing, I will send it over to Silky Johnson for a few words.  Go ahead Silk. 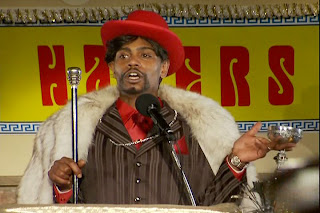 "We are the Time-Haters. We've traveled back in time... to call ya a cracker."

Looks as though Samuel has done it again!  In advance of the biggest series of the year to date, he has been given "the weekend off".  Say what you will about the optics of said decision and how it equates to censorship.  But knowing how Wilner conducts himself and his business, I am pretty sure he deserved whatever he got.  And personally, I think it looks good on him.....

How does it feel to be on the other end of the phone Samuel?

Now, moving forward, he really has but two options:

1) He tones it down and tries to play nice with the other children.
2) He comes back even more insufferable than before.

Is there really any doubt which way he goes on this one?
Posted by The Man With The Golden Arm at 12:10 AM