Yet Another Reason NOT To Head Down To The Ballpark 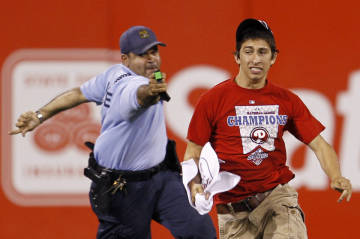 Because this may happen to you.....

And you thought going bat shit crazy in an international airport was not grounds to be zapped, check this shit out!  Make sure to read the comments section.

Courtesy of The Globe and Mail:

The Philadelphia Phillies are looking into further use of Taser guns after a police officer shocked a teenage fan who ran onto the field Monday night.

The fan hopped a fence and scurried around the outfield, eluding two security officers late in the game against the St. Louis Cardinals. One officer used a Taser and the fan went down in a heap.

The Phillies say the police department is investigating the matter and discussing with the team whether it's appropriate use of force under similar circumstances.

The teams says it's the first time a Taser has been used by police to apprehend a spectator who ran onto the field.

The Phillies say the fan was 17-year-old male and he will be charged with criminal trespass and related offences. They did not release his name because he is a juvenile.

Posted by The Man With The Golden Arm at 7:01 AM

Labels: bat shit crazy, I fought the law and the law won