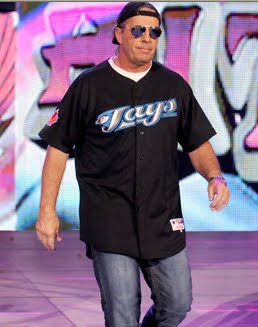 Legendary professional wrestler Bret "The Hitman" Hart appeared at WWE's live Monday Night Raw program this week in Toronto's Air Canada Centre. Hart opened the show by walking into the arena sporting a Blue Jays jersey, to the delight of the hometown crowd.

Hart undoubtedly is the most successful Canadian pro wrestler in history, having won multiple world titles and other championships throughout his career. Hart had been retired from active wrestling for years, after suffering from post-concussion syndrome in late 1999-early 2000. However, he returned to WWE this year for a stint that was supposed to be a one-time return to face WWE owner Vince McMahon in a match at this year's Wrestlemania.

That brief return has been extended as, somehow, the 52-year-old Hart has been convinced to sign an extension with WWE and was challenged by MTV Real World alum and United States champion Mike "The Miz" Mizanin. Bret Hart defeated Mizanin on Monday night to become WWE's United States Heavyweight title holder. Good luck was no doubt brought The Hitman's way because of his chosen baseball affiliation. 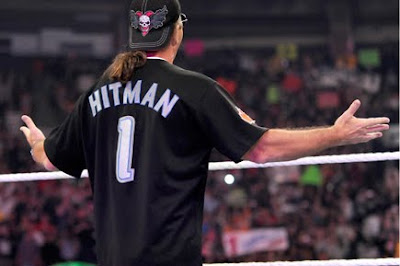