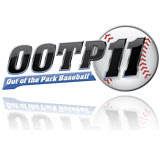 "Man, I could do a better job than that GM!"

Most baseball fans have thought or said those words that at one time or another. Out of the Park Baseball 11 offers you the chance to back that statement up with an unparalleled set of features that allow for an addictive, customizable baseball experience.

Occasionally I receive an e-mail from the Baseball Bloggers Alliance that turns out to be something really interesting.  We here at 1bluejaysway got an opportunity to be part of a trial for a computer simulation game.  It was a good deal for everyone involved.  We got a key to the game which made it free as long as we actually ran the simulation for a full season and reported the results to the company.  Then we write about it.  Simple enough.

So I was able to give it a try a few days ago and then spent some time observing the results.   I will say this: the game covers EVERY aspect of running a team that you could possibly imagine without actually playing any of the games.  Due to my lack of experience using it, I will leave it there for now.

So let's look at the overall results for 2010 first and then we can look specifically at your Toronto Blue Jays.

In my simulation season neither the Phillies or the Skankees made the playoffs!  What makes that even more shocking is the fact that the wildcard came out of the AL East, with both the Red Sucks and Rays making the playoffs.  The World Series featured the Mariners of Seattle vs. the Giants of San Fransisco.  Giants won it.

Alright enough of that.  Let's talk about our beloved Blue Jays.  I will remind you, this is a simulation.  It has variables.  Trades happened, players signed, guys got injured etc.

Our record after a 162 games was 76 - 86.  We finished 27 games out of first place and 23 out of the wildcard.  We did finish 2 games above Baltimore, good for forth place in the division.

One of our top prospects Brett Wallace did get his shot in the big leagues.  He played 15 games and had 36 at bats.  He was able to hit .306 with 1 bomb, 4 doubles and 5 RBI.  Most importantly, he only had 37 days of service time.

Now the bad news, injuries.  I know that's totally not what you want to hear but wow.  Here are just some of them:
Now for the downright outrageous, we released Kyle Drabek because of a career ending injury.  Jose Molina retired and we signed Jermaine Dye.

To me this game is interesting in it's concept and fantastic in it's functionality.  In order to fully enjoy it, I believe you would need to have a few friends purchase it with you.  I can see this potentially taking off, in the same vein as fantasy baseball.

I plan on restarting this game and going week by week along with the 2010 season.  I will also sim my PS3 baseball video game and report the results in the weekly round up.

Posted by The Man With The Golden Arm at 2:06 AM