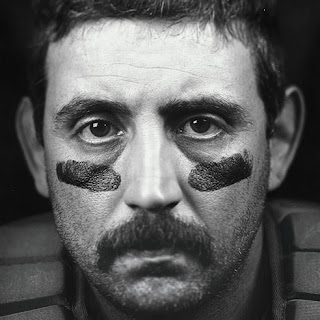 Happy MLB Opening Day!
The 2010 Lansing Lugnuts arrived safely into Michigan last night, resplendently mustachioed Salvatore Frank Fasano leading the way. The ride to Lexington Lansing Hotel was smooth and relaxed; the players won't see their new home ballpark until this afternoon.
While the Blue Jays take the field today, their Class-A minor leaguers receive their uniform numbers. The guys all sent in their numerical requests before they got on the plane to Detroit, but unfortunately for many of them, jerseys are numbered by size in the minors. The smallest jerseys get the smallest numbers, the biggest jerseys get the biggest numbers. There's no haggling about it.
There's no doubting who gets the largest number on the team: Sal Fasano is big and barrel-chested. The Lugnuts have already had to order out for an extra-large jersey for him.
Sal may cut an imposing figure, but this does not look to be a team in need of a great disciplinarian. In great contrast to years past, the 2010 Lugnuts are a squad of mostly collegians -- 22-year-olds and 23-year-olds balancing acumen with maturity. It's a far cry from the talented but raw collection of high schoolers from 2008 (John Tolisano, Kevin Ahrens, Justin Jackson).
The starting rotation will feature Ryan Shopshire, Matt Fields, 1st round pick Chad Jenkins, Ryan Tepera, and Dave Sever... though not necessarily in that order. The back of the bullpen will see Brian Slover and Steve Turnbull.
The early offensive storylines:
* A pair of fleet 2nd round outfielders drafted out of high school, Eric Eiland and Kenny Wilson, try to recoup their potential.
* A pair of former LSU teammates, Sean Ochinko and Ryan Schimpf, look to build upon their strong spring training performances.
Tomorrow is the squad's first practice. Wednesday's an exhibition against the Michigan State Spartans.
Thursday's Opening Day in all of the Minor Leagues; the Lugnuts will be in Dayton, Ohio. I expect Ryan Shopshire to be on the mound for that first game.
Posted by Jesse, Lugnuts at 10:46 AM

Labels: news from the farm, Virgin