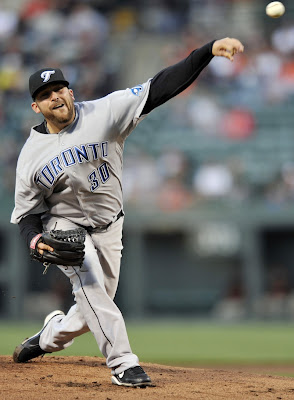 It only took 94 pitches for Dana Eveland to go 7 1/3 innings.  59 of them were strikes.  7 of them were 90 MPH or higher.  He left in the 8th inning with a runner on first base and the shut out in tact.  He turned it over to the bullpen for the last five outs.  Ballgame over.  Your Toronto Blue Jays win 3 - 0 and remain in first place. 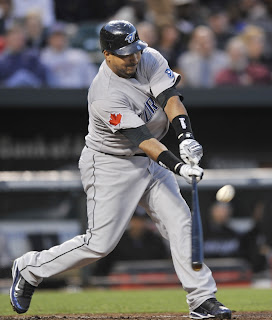 Calling the Ronald Reagan era fastballs (81 - 89) behind the plate was back up catcher and number nine hitter Jose Molina.  With the stick he went 2 for 3 with 2 big RBI.  Travis Snider was intentionally walked before both of Molina's RBI at bats.  Molina also threw out a runner trying to steal a base on him.

E5 made a couple of good plays at third base tonight.  It's a lot of fun watching him play defense.  It's like he knows he sucks at it.  It makes me so nervous whenever the ball is hit in his direction.  His stick is coming around which is encouraging to see.  He was 2 for 4 with two runs scored.

Umpire Joe West was behind the plate to call balls and strikes.  He talked some shit about how long the Evil Empire and the Red Sucks took to play their games last series.  Tonight, it was his turn to show everyone what a 2 hour and 24 minute baseball game looked like.

Sam Cosentino had 17 orgasms and needs some fresh pants after pinch hitting for Buck Martinez on the play by play call.  He actually gets paid money to pleasure himself inside the booth with Pat Tabler awkwardly looking on.
Posted by The Man With The Golden Arm at 11:13 PM