Game 17 Recap: I Have No Fingernails Left 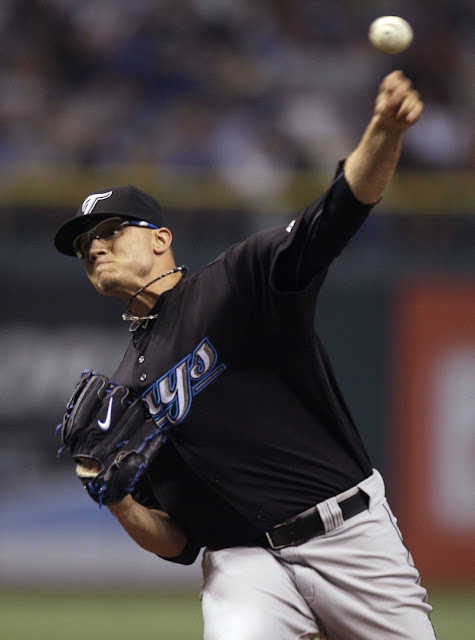 This will be brief.  My fingers hurt and it's making it tough to type.....

Brett Cecil pitched a great game for us against a very tough opponent.

But he got left out there for one inning to long and he got tagged.  I understand why The Cito ran him back out there (low pitch count, hitting his spots, etc) but why the fuck was no one ready in the pen?

Jose Bautista had a great game with both the stick and the glove.  He saved a big run in the bottom of the sixth on a nice play to his left.  He did not get an out on the play but was able to keep the ball of the infield.  With the bat he went 3 for 5 with 3 doubles.  He looks a little better suited to hit down in the order.

Actually having a lead off guy.  Fred Lewis is music to my eyes.....It's been too long since we had a guy that puts pressure on the defense with his legs.  He ended up 2 for 4 with a double and a walk.  He was able to get some great jumps off Garza and should steal us quite a few bags.

Aaron Hill looked a little lost for the first few at bats.  But he managed to get his timing together enough to launch a dinger to left.  He also walked.

Tomorrow we got Ricky and his 1.57 ERA on the hill for a 6:10pm start.  Your Toronto Blue Jays will be looking for their 11th win of the year.
Posted by The Man With The Golden Arm at 11:27 PM