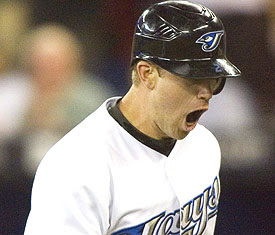 Aaron is back in his familiar spot in the order.  I am a little surprised to see Gonzo moved down and would have though he might hit lead off.  It would be nice to get some production from the bottom of the order and I'm guessing The Cito had that in mind when he made up the line up card.

Brett Cecil makes his 2010 debut.  I can't wait to see Cecil take the ball every five days.  Hope he can get rolling a little bit and pitch with some confidence.

Go Jays!
Posted by The Man With The Golden Arm at 6:19 PM

Labels: Hill is back