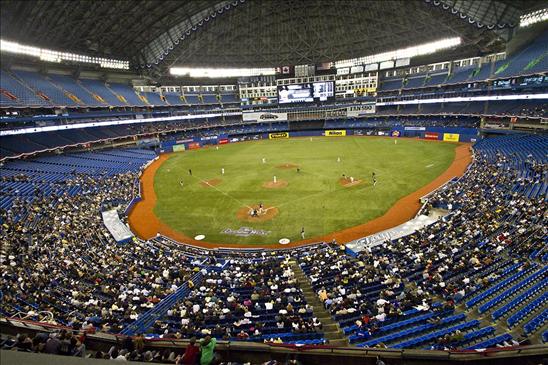 We really should be ashamed of ourselves.

The roof was open for baseball this season earlier than any other year.  The previous record was April 16, 2002.

Your Toronto Blue Jays managed to get a split with the White Sox on the strength of Dana Eveland's left arm and Alex Gonzalez's bat.  Eveland was able to pick up where he left off from his last start, although this time around he relied heavily on the breaking ball as opposed to the change up which was so good against Baltimore.  He looks very good and is proving to be a shrewd pick up by the Boy Wonder.  Some guys really just need a change of scenery and Eveland appears to be one of those guys.  He picked up his second win of the season and his ERA sits at 1.35.

Shortstop Alex Gonzalez is making his case to remain in the two hole.  For the game he went 4 for 5 with 3 RBI.  The thing I like about him is: he murders low pitches.  In the two hole he can expect to see a lot of them that is if the lead off guy gets on base.  Teams will be trying to induce the double play and that plays right into his strength as a hitter.

Alright I want to talk about our first baseman and number five hitter Lyle Overbay.  For the record, I believe he needs to be in the line up everyday.  He entered yesterday's game hitting .088 and after his 0 for 5 with 4 strikeouts, his average sits at .077.  For the year he is 3 for 39.  Some of it can probably be attributed to his fucking terrible entrance music:

No way he gets pumped up to hit listening to this crap.

Now, before we all start calling on The Cito to bench his ass or platoon him with cult hero Randy Ruiz let's think about this.  He is going to be a free agent next year.  We NEED to get something in return for him.  The only way to do that is by trading him or rolling the dice in the arbitration game.  So yeah, keep running him out there no matter how painful it is to watch.

He has absolutely no business hitting in the five spot.  NONE.  Other teams are beginning to base their strategy around facing him and that is something that is starting to hurt his teammates chances of succeeding.

I think it is time for him to move down in the order.  Perhaps a day off first to let him know there are no free passes and then into the 7th or 8th spot you go until he gets it going.

But try to keep some perspective on Lyle.  One good 4 for 4 game from him and his average more than doubles to .163, which is still pretty bad but it's very early.

Head's up play by Bautista in the top of the 6th got us out of a jam.  He observed Juan Pierre forgetting to tag back up and third base and alertly told Gonzalez to tag him for the 8-4-6 double play.

Gordan Beckham made a unbelievable play at second base in the bottom of the 5th to rob Travis Snider of a hit.  Beckham went to his right, dove full out to make the stop.  Then he flipped the ball to second to get the force on Bautista.  He did not have time to make the transfer to his throwing hand.  It was pretty.  The players call that a "web gem".

Speaking of Travis Snider, he hit his first home run of the season to right field.  Big shot to the second deck.  Check out the bat flip after he connects, man this kid is going to be good once he figures it out.....he also made a nice diving catch in left field to take away a base hit.

We made a move to get some much needed outfield help shortly after the game.  As mentioned in game 9's recap, Fred Lewis was acquired for a PTBNL or cash.  I have already told our boy Jesse to be on the lookout for some Giant scouts in the next few games in Lansing.  Basically how a Player To Be Named Later works is: the Blue Jays give the Giants a list of X number of guys that they can choose from.  The Giants scout them over a period of time and then choose one.  If they don't want any of the players, then they take the cash.

The book on Lewis is he has above average speed which translates to decent outfield defense.  With the stick, he has some pop and began last year as the Giant's number three hitter.  He is primarily a left fielder, although he has played all three outfield positions in the past.  With us, he will be the back up and should come off the bench to pinch run.  He bats left, so if our manager ever considered pinch hitting, he could be an option against right handed pitching late in a game.  If he plays well, you may see him take some at bats from Bautista against right handed pitching but the brain trust has said for now, he is the back up.

He is out of options and cannot be sent to the minors without exposing him to waivers.  So Jeremy Reed was sent back to triple A to make room for him on the Major League roster and Dustin McGowan was transferred to the 60 day DL to make room on the 40 man roster.  Once Aaron Hill is back, look for Mike McCoy or Randy Ruiz to be sent back to Vegas.  Numbers game victim.

I think he would look pretty good at the top of our order but what do I know?
Posted by The Man With The Golden Arm at 12:52 PM