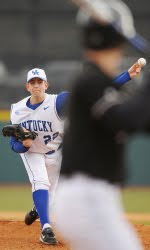 A major development has taken place in The Paxton Affair.  Seems that the young lefthanded flamethrower has decided to walk away from his scholarship, his teammates, his education and his friends.

He declined to say whether James was represented by Boras, adding "this is where our legal counsel has suggested we not get involved."

UK had said allowing Paxton to play with the team could put the school's entire athletics department at risk.
"Obviously he didn't want to create any risk for the team," Ted Paxton said.

He mentioned James plans to play in an independent league and enter the Major League Baseball draft in June.

"James has decided not to play with us. What I can tell you is the University of Kentucky and Gary Henderson have done everything they can to try and convince James to be a part of this baseball team. We wanted him to be a part of our club; he could certainly make us a better team. I think it would have been the best decision for him baseball-wise, but he’s decided not to do that." UK's baseball coach Gary Henderson said.

UK has released its official statement about Paxton’s decision:


The University of Kentucky is very disappointed in James Paxton’s decision to not meet with the NCAA about a potential amateurism issue. No one wanted James on the mound in a Kentucky uniform more than UK head coach Gary Henderson, athletics director Mitch Barnhart and the UK Athletics staff. Due to the possibility of future penalties, including forfeiture of games, UK could not put the other 32 players of the team and the entire UK 22-sport intercollegiate athletics department at risk by having James compete. It’s about the team and giving student-athletes the opportunity to achieve their goals. Throughout the process, UK has remained confident that James would be able to pitch for Kentucky during the 2010 season and UK offered every bit of assistance to aid James in that NCAA process.
UK does not know all the facts of last summer’s post-draft interaction among James, his advisors and the Toronto Blue Jays and has not prejudged his situation. James has an obligation under NCAA Bylaw 10.1 (j) to answer questions that relate to his amateur status. On advice of his counsel, James has elected not to be interviewed by the NCAA. UK has offered to pursue an immediate application for reinstatement for James with the NCAA if that became necessary. However, no request for reinstatement of his eligibility can be made based on mitigating circumstances until the student-athlete and his family cooperate and make all facts known to UK, with the NCAA having the opportunity to verify those facts. UK has never been provided all pertinent information from James and his family, who are following the legal advice of his attorneys not to be interviewed by the NCAA. Without knowing all the facts, UK cannot present mitigating circumstances to the NCAA on James’ behalf.
UK is more optimistic than James and his family that any period of ineligibility could be shortened to allow James to pitch during the last and most important part of the season, the Southeastern Conference schedule. So it is disappointing that James is unwilling to go through the normal NCAA process, allowing UK to appeal for him, if necessary. The University of Kentucky is sad to see James leave its baseball team, especially after other players gave up portions of their scholarships in August so that he would have a substantial scholarship for his senior year.
While UK is extremely disappointed in the decision made by James to not meet with the NCAA, he will always be a member of the Wildcat family. UK hopes that James will stay and earn his degree and wishes him the best in his professional baseball career. Should James change his mind and be willing to cooperate with the NCAA inquiry, the door is open for him to return to the UK baseball team and UK will seek any immediate appeal necessary for his reinstatement.

For an open letter to James Paxton written by a real fan, click here.  Good stuff right there.

MLB '10 : The Show is out for Playstation 3 today.  The new "Catcher Mode" gives the ability to call the game as the catcher, select pitches, and be the ultimate field general.

I think it is fair to say that I'm going to be busy for a while building up my switch hitting catcher, The Fist.  A friend of mine lent me MLB '08 a couple of weeks ago and I made it to the majors in my third season for the Jays.  Funny story: Vernon Wells was released at the end of the 2010 season in my road to the show mode.  We picked up Rajai Davis instead.....