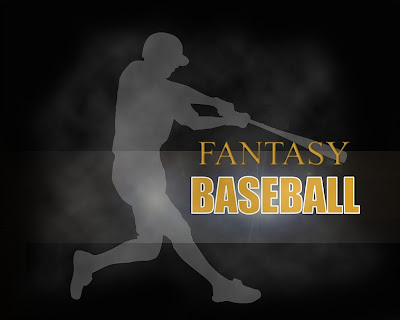 Fantasy baseball is in full swing.  By now, you must have had your draft(s) or are getting pretty darn close.  I myself have already taken part in one snake draft, am still trying to fill out my team in a slow auction which started over a week ago and have another auction draft party this Saturday in my big money AL only league.  I actually had so many teams going that I had to back out of one league.  Hey, I gave over a weeks notice.  Nothing worse than fucking over the league by quitting half way through a draft.....cough (websoulsurfer) cough

With each league comes a different set of rules.  I got mixed head to head leagues, standard 5 X 5 roto leagues, AL only keeper leagues.  It's sometimes hard to keep it all separate.  I follow all the games, read all the boxscores and keep up with the players as best I can but I must say my knowledge of NL baseball is not as in depth as the AL.  My team I cheer for plays there.  I do have a few guys on my advisory committee who are NL guys.  I lean on them heavily this time of year.  What am I suppose to do, watch ALL the games in baseball?  I would love to but need to stay employed, eat, sleep and occasionally bathe.

About four years ago my good friend and inside scoop guy who works at The Canadian Baseball Hall of Fame in St. Marys called.  You see, me and this guy talk on the telephone about baseball.  While he is at work.  It's in his job description.  I'm totally jealous.  Anyways, we normally end up talking about the Blue Jays but occasionally he or I have something specific to discuss.  That day four years ago he did.  And it was fantasy baseball.  His boss had given the green light to a fundraiser fantasy baseball pool and he was lost.  He had no idea what to do and wanted me to consult.  I told him I wanted to be paid.  He said no.  I told him fine, then I want to have a title.  He asked what is was and after some thought I came back with: Senior Fantasy Adviser/Advisor to The Canadian Baseball Hall of Fame.  He wisely agreed, although I never did get those business cards.....I proceeded to offer him a few observations I had made over the years of playing fantasy baseball.  They are as follows:

1. Keep it simple
2. Keep it cheap
3. Offer prizes that people can't easily get.

So from there we basically created the pool from scratch.  Four years later, we need your help.

It's only ten bucks and the thing I really like about it is you only have to select your players once.  No daily transactions.  You just hope that your guys avoid injury.  Last year I finished 4th or 5th and ended up walking away with an authentic Expos hat and a signed Fergie Jenkins baseball with certificate of authenticity.  Not a bad haul.

I also really like that the scoring categories and their values are unique.  Complete games are rewarded greatly as well as triples.

Fill it out and send it back.  Deadline is March 31st at midnight.  Plenty of time to get it in.  For all you out of towners, I will buy the Jays tickets off you if you win and can't go.
Posted by The Man With The Golden Arm at 3:14 AM