Whatever Happened To Jo-Jo?

Well that is just completely unacceptable to me. And today I had an opportunity to think about and research "the other guy" in the Escobar trade.

LHP Jo-Jo Reyes was selected in the 2nd round, 43rd overall, of the 2003 Amateur Draft out of high school in California. He was given an $800,000 signing bonus to skip school and play baseball full time.

The big lefty features the following pitches in his repertoire:
It is safe to say he is pretty much a fastball, slider kinda guy. The other 3 pitches only get mixed in less than 10% of the time. From what I have read his best pitch is either the change up or the curveball depending on who you ask. Makes you wonder why he doesn't throw them a little more?

Jo-Jo made his debut as a 22 year old in the show in 2007, which also happens to be the year he was listed as the Braves 7th best prospect. He had breezed through their system in a very short time and pretty much struck out a batter an inning everywhere he made a stop, except the big leagues.


As you can see, Jo-Jo has been used almost exclusively as a starting pitcher up till this year. He had some success in the minors but struggled considerably when pitching to MLB hitters.

I was able to find out why that is courtesy of the Atlanta Braves Examiner:

In 2009 Reyes held opposing batters to a .220 average through his first 50 pitches, but after that point they hit .318 off of him. The first time through a lineup he held the opposing offense to an average of .189, the second time .216 and the third time the batters caught up to him and hit a robust .417 off the lefty.

I think a look at his splits will help answer the riddle as well. I will try to sum up his MLB career for you:

In 698 plate appearances right handed hitters are hitting him at a .320 clip. He also has served up 27 of his 33 homers to them. Angry Little Girl.

On the other hand, in 186 plate appearances lefties have only managed to hit .215 against him. Happy Cat.

Alright. Seriously. Is any of this sounding even the slightest bit familiar?

Can you say David Purcey redux?

Disclaimer: Normally I am completely against converting starters into relievers unless they are old or injury prone *cough* Dustin McGowan *cough*

The brain trust needs to tell this young man to simply pick two or three of his best pitches and drop the rest. Then they need to send him to the bullpen full time to dominate in a situational role. I'll bet the Braves had just figured that out this year and most likely ran out of the patience needed to see the transformation through.

I doubt we make the same mistake. 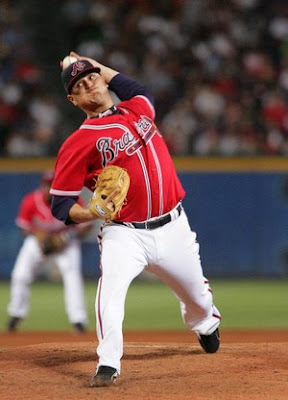 Posted by The Man With The Golden Arm at 5:24 AM