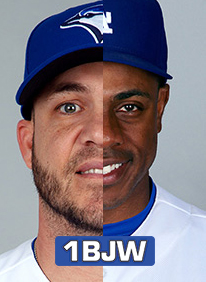 Gibby has experience running an OF platoon; he’s done it magnificently once and another time, well, not so much.

Let's examine the latest version handed down to the skipper by the braintrust.

Looks good so far, but let's take a look under the hood.

There are a few issues with this tandem that we can see. The first is age and, with that, you've gotta discuss injury risk. Playing on the carpet while rolling the dice on some vets in the OF seems risky; next, the fact that Steve Pearce was shit against lefties last year.

He came here with a lefty masher reputation but we didn't see that from him last year. That said, he fared pretty okay against right-handed pitching:

For the strong side of a platoon, this isn't terrible. If Gibby were to run a strict platoon and we smash all that up from 2017, it looks a little something like this for 2018:

That’s some production right there, as Buck would say. No idea on the rate stats but we can tell you that it ain’t gonna be pretty. Who cares about batting average, right?

Pulling out the crystal ball, we think that Pearce will get the majority of starts. Grandyman can come in for defensive replacement or to face a tough righty in a big spot.

If Grandyman does get the majority of starts vs RHP and gets pinch hit for by Pierce against a LOOGY, then hopefully Diaz or Solarte can play a passable LF for an inning or two.
Posted by The Man With The Golden Arm at 4:12 PM