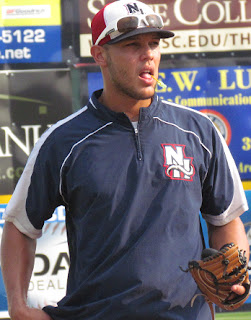 Ranked among the Blue Jays' top prospects, catcher A.J. Jimenez represented Toronto in this year's MLB Futures Game roughly a year after being sidelined in need of Tommy John surgery.  Back from rehab, the 23-year-old is putting forth very solid output this year, sporting a combined .349 average with two homers and 25 RBI in 39 games at two levels.

Selected in the 9th round of the 2008 amateur draft by Toronto, Jimenez has progressed steadily up the developmental ladder since turning pro. In 2011 in the Class A Advanced Florida State League, Jimenez sported a .303/.353/.417 line and was named a mid-season and post-season All-Star.  Last year, in the midst of another good campaign (.257 avg, two home runs, 10 RBI in 27 games), Jimenez was faced with the need for surgery and missed the remainder of the season.

This weekend I spoke with A.J. about his Futures Game experience, his recovery from surgery and plenty more.  Read ahead for that full interview.


- Last year you went through Tommy John surgery, something that's not very common among position players.  Take me through the process for you and the recovery stretch of it.

Yeah, I got hurt, like, three or four years ago.  I was playing with the pain, through something with the elbow.  Then last year, it came up again and then we just get it fixed.  And it was a long year, the rehab.  It was a long one, like a boring one.  But finally we are here, one-hundred percent, and I'm back playing.  I'm feeling great.


- During the time you were down in Dunedin rehabbing and working to get back, who was the biggest help to you as far as your recovery process went?

I would say the head guy, Jeff (Stevenson) he was helping me with the rehab and I was with the catching staff, with (Sal) Fasano all the time, working on the arm mechanics and all that stuff.  And, yeah, all the strength guys, they were great too, helping me, working and rehab and now finally I'm here.


- I spoke with you last year and I remember that you praised Sal a lot.  He was the manager with New Hampshire then and you said you looked up to him.  I know his role has changed within the organization, but what can you share with me about what Sal's role is and what he's doing overall?

He's the catchers' coordinator right now.  He's always traveling.  I haven't seen him in, like, two, three weeks.  But, he's (a) great guy and I'm learning a lot from him and he's the best guy for his job.


- You spoke about that elbow injury, having dealt with that for a while.  Was the ailment always there or did it go away for some time and come back?

It was always there.  I think I was getting used to it, playing when I was sore.  But, yeah, I just got tired of it and got it fixed.


- You're playing great this year, through 30 games with Double-A New Hampshire you've posted a .331 average and batted .429 in nine games with High A Dunedin.  What do you attribute to the solid success this season after returning from the injury?

I would say patience.  I was here last year, so I learned a little bit from last year too.  And I was just in my game, you know?  Just be confident back there, focused on catching good, hitting good.  That's what it's all about.


- You got a nice honor this year.  You got to go out and play at the MLB All-Star Futures Game.  Talk about that a bit...how did you get the news?  What was your reaction?  And how was the whole event for you?

It caught me by surprise, 'cause I was back 15 games at that time, playing, so my agent called me.  He was the first one and I didn't believe it at that time.  And then the manager called me into the office and then gave me the news.

It was a great experience, like, with big names on that team and I had fun.  It was the first time I've been in a big game like that.  It was fun.


- That game was at Citi Field, it's in New York, it's on a big stage.  Had you played in a big league park before?

No, that was the first time.  In front of a big crowd, in that big park, I was excited.


- That's cool.  You got to go out there and I know you drove from Reading, up to New York, with a couple Phillies guys, Jesse Biddle and Maikel Franco.  Did you get to bond with those guys at all?

Yeah.  I played (against) them, like three or four times this year.  We talked a lot in the car and they're great guys.


- You talked about playing on that big stage, playing in that big league park, clearly playing there regularly is the goal for every player.  But, when you get a sample of that, does that make you hungrier to get back there and play in those big parks again?

Yeah, sure.  I mean, it was like I was a big leaguer for one day.  I just want to stay there and now I'm fighting and working harder to get there.


- Some former big leaguers were coaches for those teams.  Was there anyone you got to meet that made a big impression on you, or you were able to talk to and learn things from?

I would say back in the days it was Pudge (Rodriguez).  I always looked at Pudge like my big guy.  But, now, I would say (Yadier) Molina.  He's great at that position.  I mean, I'm not trying to be him, but I'm trying to get close.
Posted by Jay Floyd at 1:33 PM