Interview With Our Boy Jesse 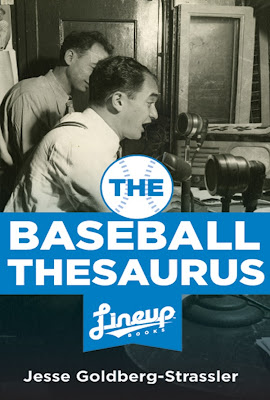 Here's a little something that we thought might be of interest. Our boy Jesse has written a book about baseball and took some time out of his busy off season schedule to answer a few of our questions. Please join us in sending your congratulations to Jesse on the accomplishment!

Q: How does it feel to be a published author?

I'd envisioned this moment for so many years.  Now it's here, and it's got me slightly dazed.  I don't think I'll really believe it, though, until I see my book on a shelf in a bookstore.

Q: How long has this book been in the making? Is it fair to say you’ve been writing it your whole life?

I've been a baseball fan my whole life, that's true, but I'd only date the true genesis of the book back as far as 2005.  I was an intern for the Brockton Rox, hosting the pre-game and post-game show, and I realized I was using the same words over and over to describe each game.  (Every home run was "hammered," every loss was "suffered.")  Frustrated with my own lack of creativity, I started brainstorming other words to use.  Things took off from there, with the majority of the work completed during the 2010 season.


Q: Where can people go to buy The Baseball Thesaurus now and will it be available in print form soon?

"The Baseball Thesaurus" is currently available through Apple Books, the Amazon Kindle, the Barnes and Noble NOOK, and through Vook.  The electronic version is priced at just $5.99.  It will be released in print before the end of the month.


Q: Who do you think will get the most enjoyment out of this book as the holiday season approaches?

Everyone.  I've heard from true baseball diehards that they were surprised by how many stories they had never read before, and I've heard from people with only a passing interest in the game -- and yet they couldn't get over how much they enjoyed reading about baseball.


Q: Being that you are a broadcaster for the Lansing Lugnuts, have you ever used a word/term/phrase on air that someone asked you about after?

All the time.  The third inning, actually, is my official "Baseball Lingo" inning, where I'll use a bit of slang in the top half and define it in the bottom half.  It's been a popular feature ever since I introduced it in 2008.


Q: Is there one or a few terms in the book that are your favorites to use either on air? Why?

Every year brings a new favorite.  "Wormburner" (a hot ground ball) caught on hugely two years ago.  When Drew Hutchison pitched for the Lugnuts in 2011, his change-up was termed "the dead fish," and that became fun to foreshadow. ("The 2-2 pitch....  The dead fish!  Swung on and missed, side retired!")


Q: How would you describe Noah Syndergaard’s fastball if you could only use the material found in your book?

Sometimes it's a chainsaw, making kindling out of the other team's lumber rack.  Other times, it's the ol' radio ball, able to be heard but not seen.

During the year, by the way, Noah described one of his heaters as an "angry ball."  I'd never heard that term before, but I love it.  You know exactly what he means.


Q: Did you encounter writer’s block at any point during the making of your book? If so, how did you manage to overcome it?

It was the opposite, actually, that got me in trouble.  I'd spend the entire day typing intensely, forgetting to eat and forgetting to exercise.  I would also flip madly through book after book in my library, trying to find any additional information/quotes/anecdotes that I could include.


Q: Seeing that Mike Redmond was the manager of the Lugnuts in 2011 and Sal Fasano was the manager in 2010, did you have an opportunity to quiz the former Big League veterans on their baseball lingo knowledge?

Oh, yes, mostly with Sal, but each guy gave a laugh and shrugged.  Here's the thing about it:  Sometimes the guys involved in the game don't even realize how much slang invades their vocabulary.  They're just talking, simple as that.  I picked up far more by just listening and asking innocent questions than by talking directly about the idea of "baseball lingo."


Q: Do you have any favorite baseball related books that inspired you to create The Baseball Thesaurus?

"The Dickson Baseball Dictionary" is the ultimate baseball reference tome and my foremost inspiration.  I wrote to Paul Dickson and asked for his blessing before proceeding.  Otherwise, I felt it might feel like I was stepping on his toes.  Other motivating baseball books:  Peter Morris' "A Game of Inches," Bill James' "Whatever Happened to the Hall of Fame" (I wore that book out when I was a kid), Daniel Okrent and Steve Wulf's "Baseball Anecdotes," and everything by Rob Neyer.


Q: Describe the process of finding a publisher (August Publications) in this internet driven age we live in. Was it a challenge?

*  Summer 2009 & Winter/Spring/Summer 2010:  Wrote book.  (20,000 words)
*  Fall 2010:  Signed with a reputable New York City literary agent (DeFiore & Co.) who was enthused about the book and its potential; he asked me to bump the book up to 35,000 words, so I did so.
*  January 2011:  Informed by the agent that publishers loved the idea but didn't want to take the chance; agent wished me luck and moved onward.  Well then.
*  Winter/Spring/Summer 2011:  Sent out Thesaurus to anyone and everyone.  Dirk Hayhurst provided the most help, offering a new direction for the book (make it funnier and more inside-the-clubhouse oriented).  I wrote two pages of this, then quit.  There's only so much "inside the clubhouse" a person can write without jeopardizing his career in baseball.  I also sent the Thesaurus to Kevin Reichard of Ballpark Digest because, hey, why not?  I was sending it to everyone at this point, hoping for the best somehow.
*  Fall 2011:  Contacted by Kevin Reichard, explaining that (unbeknownst to me) he was in charge of August Publications and he wished to publish "The Baseball Thesaurus."


Q: Which of the old school terms, not currently being used anymore, would you like to see make a comeback?


Q: Being around Low A ballplayers for basically half the year, do you sit and listen to their conversations for new material that you may not have heard before?

Oh yes.  The best players to listen to are hitters, who love talking shop.  I hear new synonyms for a home run every year.


Q: Are you working on any other writing projects that you hope to get published as well?


I'm working on two different ideas for novels as well as a football thesaurus.  It's my aim to publish books regularly now that I've got this first one under my belt.

Be sure to check out his blog here
Posted by The Man With The Golden Arm at 2:06 PM

Labels: Jesse has not been wrong yet