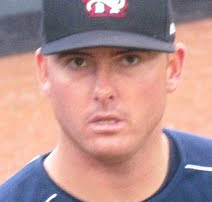 After missing 2011 following elbow surgery, Dyson, a 4th round draft selection out of the University of South Carolina in 2010, began this season with Class A Advanced Dunedin and earned a promotion to Double-A New Hampshire.

Last month I spoke with Sam about his recovery & rehab, his success this season, New Hampshire and plenty more. Read ahead to check out that interview.


-You certainly had a solid start to your pro career this year. What do you attribute to such great success?
I just try to get ahead in the count and make my pitches no matter what the count is as well. Pretty much just staying healthy and getting out there, every opportunity I have.


-You began the season with Dunedin as a starter, then moved up to New Hampshire, where you were moved to the bullpen. Do you have a preference for either role? And was it a more difficult or an easier switch than you have expected?
I think pitching in Dunedin was a little easier routine wise. Being on a five-day schedule, you know when you have to work out and you can have a little more time for your arm to recover, 'cause here, you might have an idea of when you're throwing, (or) you might not have an idea. It's a completely different routine, throwing before the game and having to sit down for a couple hours. That's just the main difference.


-I wanted to get some thoughts from you on your surgery and the recovery process overall.
I had Tommy John Surgery in October, 2010. The usual recovery time is, like, 12-16 months, or something like that. Mine took a little longer. I wasn't going to play last year anyway. I was down in Dunedin. I stayed there all off-season. I live in Tampa, so it was a 40-minute drive, so it wasn't too bad. I drove over there every day and rehabbed with the Blue Jays training staff.


-Were there any real setbacks, or did everything go as expected?

I think everybody has setbacks along the way, whether it's early on or, you know, once they get out here in the games. Sometimes you've got to break a little scar tissue up and stuff like that. I think mine happened at 11 months. I was right before Instructs, so they shut me down for, like, two months and then I started throwing again and that led into spring training and thank God I'm out here playing.


-Coming off being drafted that year, you had to be super excited to be selected by Toronto. Did the down time with the injury take away from that and did it make you hungrier?
I mean, it makes you hungrier whenever you're not out there playing because you definitely want to get out there. You just try to work as hard as you can, whether you're injured or whether you're not injured. I think when you're injured, you kind of see things from a different light just because everyone else is out there working their butt off and you want to do more and more and more to get out there sooner.


-And we mentioned you joining the New Hampshire club here after some time in the Florida State League this year...do you have anything thoughts on New Hampshire, the facilities, the community there?
The community is nice. It seems like it's always raining up there. We haven't had too many sunny days. And the complex is very nice. It seems like a college atmosphere. Not night-life wise, just the fans. There's a bunch of fans, like four or five thousand people every night. It's a great place to play!


-If you had the opportunity to give advice to young players that might wish to play baseball in college or in the pro's, what advice would you give?
I would say- Believe in yourself and work as hard as you can, whenever you have to opportunity to. And do the right things on and off the field and things will work out for you.