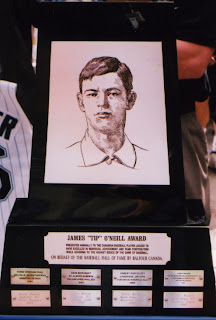 St. Marys – The 26 Canadians that donned major league uniforms in 2011 was the largest number in more than a century, and that means the voting for the Tip O’Neill Award is going to be as challenging as ever. The annual recognition stems from the Canadian Baseball Hall of Fame & Museum and is given to the player judged to have excelled in individual achievement and team contribution while adhering to baseball’s highest ideals.

The Ball Hall is seeking input prior to the decision being announced on December 14th. Please send your top three choices in order by emailing baseball@baseballhalloffame.ca or you can vote on our website at www.baseballhalloffame.ca (there is a poll on the bottom right hand corner)

Larry Walker is the all-time leader in “Tip” awards with nine. Jason Bay sits second with three, while Justin Morneau and Eric Gagné, with two each, are the only others to win more than once. 2010 recipient Joey Votto has a chance to join the club of multiple winners after another stellar season, but he is up against some strong competition from the likes of John Axford, Erik Bedard, Jesse Crain, Russ Martin and Brett Lawrie.

The following is an alphabetic summary, from Axford to Votto, of the Canucks who played in “The Show” in 2011, along with a pair of candidates from Team Canada’s men’s and women’s teams:

John Axford (Port Dover, ON) – Led the Milwaukee Brewers to the playoffs with a National League leading 46 saves, won the NL Rolaids Relief Man award and finished ninth in Cy Young voting. The 6’5”, 195-pounder’s single season save total ranks third in Canadian history, trailing only Eric Gagné, who chalked up seasons of 55 and 52 saves. The moustachioed right-hander compiled a 1.95 ERA with 86 strikeouts, 25 walks, and 59 hits over 73 innings. Beginning April 24th, he converted 43 consecutive saves, and overall converted 46 saves in 48 save opportunities. His ERA after the All-Star Break was 0.84. In six playoff appearances, Axford had a win, three saves, struck out nine in seven innings, and landed a 1.29 ERA.

Ryan Dempster (Gibsons, BC) – The Chicago Cubs opening day starter amassed 10 wins, threw 202 innings, striking out 191, and had a 4.80 ERA in his Canadian-best 34 starts. Nominated for the Roberto Clemente Award.

Scott Diamond (Guelph, ON) – Had seven starts for the Minnesota Twins, winning one, striking out 19 over 39 innings, and had an ERA of 5.08.

Jeff Francis (Vancouver, BC) – After injuries limited him to just 19 starts in 2010, the tall left-hander rebounded to start 31 games for the Kansas City Royals, winning six, pitching 183 innings, striking out 91, and amassing a 4.82 ERA.

Scott Richmond (Vancouver, BC) – Hampered by injury, only had one outing with the Toronto Blue Jays. Closed out the Pan Am Games gold medal game with three innings of sparkling relief against the USA to hold Canada’s 2-1 lead, and striking out the game’s final hitter to give Canada its first ever gold medal at the Senior level.

Matt Stairs (St. John, NB) – Ended incredible MLB career having played for a record 13 teams. The power hitting outfielder who hold the major league record with 23 pinch-hit homeruns. Saw limited action, mainly pinch-hit, in 56 games with Washington Nationals, totalled 10 hits and a .154 BA. Ironically, despite the left-handed slugger’s sure-fire future Canadian Baseball Hall of Fame career numbers, Stairs did not win a Tip O’Neill Award in any of his 19 seasons. Arguably could have won or shared the Tip in his best season, 1999, with 38 HR and 102 RBI, but Larry Walker knocked 37 HR and 115 RBI in 20 fewer games, and won the batting title with a .379 clip, and a superb OPS of 1.168, while Stairs batted .258 and had an .899 OPS.

The award is named after Woodstock, Ontario native James 'Tip' O'Neill, who was one of Major League baseball's first legitimate stars. With the St. Louis Browns in 1887, the outfielder set major league records in hits, doubles, slugging percentage, and total bases that season while compiling his astounding major league record .492 batting average, and SLG-691, H-225, D-52, T-19, HR-14, TB-357, R-167, RBI-123. Bases on balls were included as hits in 1887, but if O'Neill's average was calculated by today's standard, it was .435, the second highest in major league history to Hugh Duffy (.438).

Past winners of the James "Tip" O'Neill Award:

On a personal level, my write in ballot looked like this:

After some heated debate, it was accepted. Exercise your right and vote now!

The winner will be announced tomorrow. 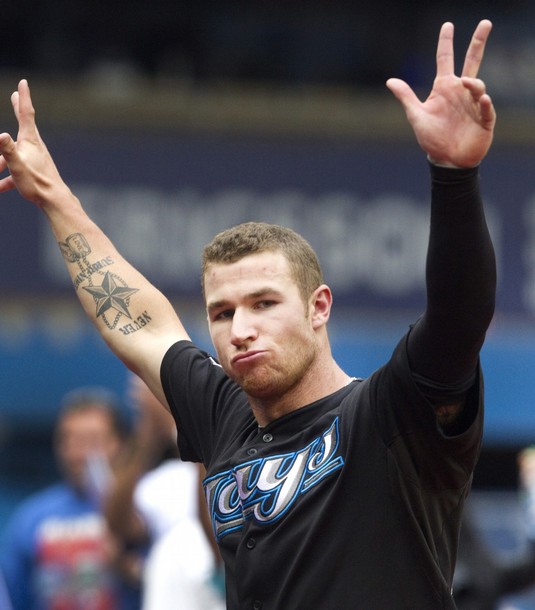 Posted by The Man With The Golden Arm at 9:30 AM