Stewart Focused on Return to Majors 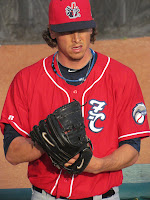 TRENTON, NJ- It was a quick cup of coffee with the Toronto Blue Jays for Zach Stewart, but after being reassigned to the Double A New Hampshire Fisher Cats on Tuesday, he's had a taste of the good stuff and wants more.

Originally selected in the 3rd round of the 2008 draft by Cincinnati, Stewart was acquired in a trade that sent Scott Rolen to the Reds in 2009. Since then, as one of Toronto's top pitching prospects, the Texas native has posted a 12-6 record and a 3.86 ERA in 49 games in the Blue Jays developmental system.

In his Major League debut on June 16th, Stewart held the Baltimore Orioles to 7 hits and 2 earned runs in 7 innings pitched, while striking out 4 and walking 1 batter.

The length of Stewart's stay with the Blue Jays was clearly brief, but his time spent in the home city of the Blue Jays was blink-and-you-missed-it short. The 24-year-old's arrival to Toronto, his first Major League start and the team's departure for a road trip all occurred within about a 24 hour period, so Stewart didn't get to particularly become familiar with the city he hopes to call home for a long time.

"I had never been there before. It was my first trip there. I got (to the Rogers Centre) at 6:30 for a 7 o'clock game, then went to the hotel to sleep and get ready for my start the next day. And as soon as (my) game was over, we left and went (on the road), so I really didn't get to see much of Toronto," Stewart explained in an exclusive interview.

However, the Toronto fans left Stewart feeling quite welcome and he describes the day as a dream come true.

"It was definitely good to throw at home and have that atmosphere (for my Major League debut)," Stewart said. "It was awesome. It was a great experience and everything I hoped it would have been."

Five days later, against the Braves, the 6-foot-2-inch 205-pounder struggled, allowing 5 earned runs and 10 hits in 3 2/3 innings. Knowing that the games at the MLB level carry more weight, Stewart asserts that his mental approach, to try to bounce back following the poor start, was the same he has used in the minors. He stuck to what has worked for him throughout his professional career and wiped his slate clean to come back out for his third start.

"At that level it's more magnified, but I didn't take (my outing against the Braves) to heart, or anything. There's bound to be bad starts, or bad breaks, so I just tried to let it go, keep my mental focus and forget about it.

The righty hurler came back strong this past Monday at Detroit. In 6 innings against the Tigers, Stewart allowed 9 hits and let up just 2 earned runs, while striking out 4 and walking 1.

Unquestionably, Stewart enjoyed his time at the highest level of baseball. He credits the entire Blue Jays club with immediately making him feel like part of the team, which is great for a youngster that is asked to jump up two levels in order to help a team that has had shaky pitching this year.

"Everybody, from the manager to the players to the trainers and everyone, treated me well," Stewart stated. "No one made me feel like I was out of my element or uncomfortable. It was was a great experience all around. I was happy with my time there."

But while Stewart is able to reflect on his brief stint in the Majors with some pleasure, the move back to the Fisher Cats roster has left him dissatisfied, with a full focus on getting back in a Toronto uniform.

Follow 1BlueJaysWay on Twitter for updates, stats, insight and more, by clicking HERE.
Posted by Jay Floyd at 9:00 AM