A retweet from Bobby Elliott 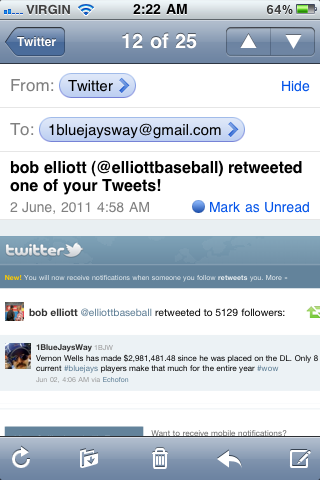 So, right before it was time for bed a thought came over me.....Vernon has been on the DL for quite some time now. I remembered Vernon was making $23 million dollars to play baseball this year but decided to head over to Cott`s just to be sure. Yep I was right.

I then multiplied that figure by the number of games Vernon (at the time) was out with his leg/groin injury. That would have been 21 games. That's how I got the total of $2,981,481.48

Not bad for 4 o'clock in the morning eh?

Right back to Cott's I went and noted that that figure is higher then most of our current Blue Jays' salaries, for the whole year.

I tweeted it out and my head hit the pillow all in one motion. When I got up I had about 15 e-mails, 90% of which was new followers which pushed me up over 6 bills.

Mr. Elliott is a total night owl and normally only ventures on Twitter between the hours of 2AM to about 5AM.
Posted by The Man With The Golden Arm at 1:45 PM