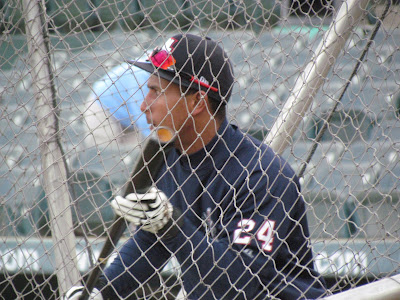 Anthony Gose is in a new organization, wearing a new uniform in a new town, but says he's still the same ball player. The quick-footed center fielder, who set out to lead all of minor league baseball in stolen bases at age 18 in 2009, and followed through when he swiped 76 bases as a member of the Phillies' Class A affiliate, the Lakewood BlueClaws, is now a member of the New Hampshire Fisher Cats. Gose was ranked as the 4th best prospect in the Blue Jays system by Baseball America prior to this season.

The 6-foot-1-inch, 195 pound Gose has stayed on track with the tools that earned him such high praise. He continues to get on base, swipe bags and exhibit terrific instincts and range on defense in the outfield.

Traded by the Phillies to Houston in the deal for starting pitcher Roy Oswalt last July, Gose ended up with Toronto when the Astros flipped him, almost immediately, in another trade for infielder Brett Wallace.

The lefty hitting Gose was playing with the Phillies High A Level team, the Clearwater Threshers, at the time and felt sure that he would be headed to Houston once rumors of a Phils deal for Oswalt began circulating heavily. When the trading commenced, Gose never heard from Houston. Even though he had been included in a package of players for the 3-time Astros All star, the first call Gose got was from Phillies assistant general manager in charge of player development Chuck LaMar, telling Gose that he was being dealt to Toronto.

For more great information, updates and insight....follow 1BJW on Twitter.
Posted by Jay Floyd at 1:42 PM