Around the Winter Leagues: Blue Jays

It's hot stove season, but there's still plenty of baseball action going on around the world. Below, we'll take a look at how Blue Jays prospects are doing in various Winter leagues. 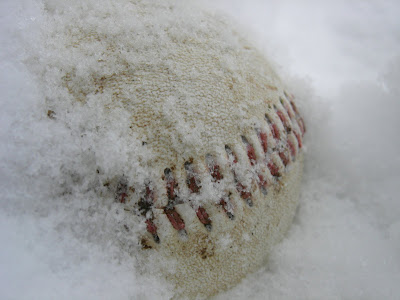 In the Venezuelan League-

Outfielder Darin Mastroianni posted a .365 batting average with 1 homerun, 18 RBI and 11 steals in 37 games for the Aguilas. Mastroianni batted .301 with a .788 OPS in 132 games for Double A New Hampshire during the 2010 regular season.

Ronald Uviendo, who the Blue Jays acquired from the Pirates in exchange for Dana Eveland this year, is pitching for the Leones. In 17 games (10 starts), the 24-year-old Uviendo has a 4-2 record with a 2.39 ERA. With Double A New Hampshire, after the trade, Uviendo went 5-3 with a 5.31 ERA in 25 games.

20-year-old first base prospect Roan Salas, a native of Venezuela, has played in just two games with the Aguilas. In those games he is 1-for-4 with a run scored.

Righty hurler Nestor Molina is 4-2 with a 2.77 ERA and has struck out 25 batters in 26 relief innings for the Cardenales. Right-handed opponents are batting .196 against Molina, while left-handers have hit at a .343 clip against him. Molina was signed as a free agent out of Venezuela in 2006 at age 17.

David Cooper, a lefty hitting first baseman that also played with New Hampshire in 2010, struggled in 6 games as a member of the Bravos. Cooper went 3-for-17 (.176 avg.) with no extra base hits.

Right-handed pitcher Wes Etheridge, acquired by Toronto this off-season, posted a 1-2 record and a 2.76 ERA in 6 games (3 starts) with the Caribes. Etheridge, a 12th round draft pick by Milwaukee in 2007, spent the 2010 regular season pitching for Maui in the independent Golden Baseball League.

The man with the best name of the bunch, Balbino Fuenmayor, has a .268 average with 1 homerun and 5 RBI in 18 games. Fuenmayor is a 21-year-old first baseman who resides in Venezuela.

Jesus Merchan, a 29-year-old infielder, has posted a .308 average with 2 doubles and 3 RBI in 14 games for the Navegantes. The former Phillies prospect batted .310 in 44 games at two levels of the Toronto system in 2010.

Henderson Alvarez, who pitched with the High A Level Dunedin Blue Jays this year, has looked good in 10 starts, despite not earning a win for the Tiburones. Alvarez has a 0-1 record with a 2.13 ERA with just 1 homerun allowed. The 20-year-old is a native of Venezuela.

In the Puerto Rican League-

Willie Collazo, a 31-year-old lefty pitcher, has posted solid number for the Gigantes. In 7 games, Collazo is 2-2 with a 3.70 ERA and has held opponents to a .213 batting average. Collazo, a native of Puerto Rico, also pitched 2 relief outings in the Venezuelan League this year.

In the Dominican League-

Ivan Contreras, a 23-year-old second baseman, is just 0-for-2 with 6 runs scored and 5 steals, appearing primarily as a pinch runner in 21 games for the Gigantes. Contreras played in the Angels system during the 2010 regular season.

Right-handed hitting outfielder Moises Sierra has a .273 average and a .909 OPS in 18 games for the Gigantes. The 22-year-old has been appearing as a reserve player lately. Sierra batted .211 in 20 combined games for the Gulf Coast League Blue Jays and High A level Dunedin during 2010.

Edwin Encarnacion who batted .244 with 21 homers in 96 games with the Blue Jays in 2010 is on the Aguilas roster. In 15 Dominican League games, Encarnacion is batting .246 with 3 homeruns and 11 RBI. The righty hitting Encarnacion is also just 1-for-12 (.083 avg) against lefty pitchers...the lone hit was a homer.

Adam Loewen has a .355 batting average with 2 homeruns and 7 RBI in 9 games with the Toros. Loewen also batted .333 with 5 homeruns and 19 in 14 games in the Arizona Fall League. The left-handed hitting Canadian was once a Major League pitcher, but is on his way back up through the ranks as an outfielder, after injuries ended his pitching career.

33-year-old righty pitcher Winston Abreu, signed by Toronto in late November, has looked excellent in 16 games for the Toros. The former Major Leaguer has not allowed an earned run in 14 2/3 innings while holding opponents to a .143 batting average.

In the Mexican League-

22-year-old outfielder Jon Del Campo, who played in 28 games with High-A level Dunedin in 2010, went hitless in 3 games with the Venados. The switch-hitter Del Campo is a native of Mexico and was a 20th round draft pick in 2006.

In the Australian League-