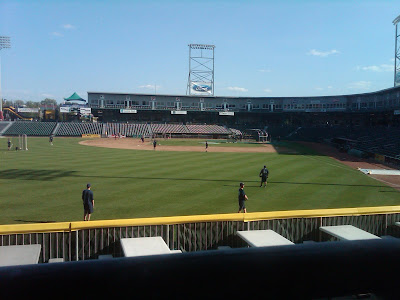 The parking at Merchants Auto is downright horrible, but thankfully every few games there are fireworks that keep the fans in the park a little bit longer, so I can get out easier. Surely it is fair to say that was not the only promotion that brought fans out to the park this summer.

The Fisher Cats won the 2010 MiLB Larry McPhail Award for the top promotion effort in all of Minor League Baseball. The Cats and their management set out with a goal to create as many fun and magical moments throughout the season, and obviously succeeded, thus winning the award. As crazy as it sounds, there were a few games that had as many as 35 promotions throughout the day. Some of which included, the crazy hot dog guy, Ollie the bat dog, the Fisher Kittens, and the aforementioned fireworks. I'm sure some of you are saying, "isn't there a game supposed to be going on?" Well obviously the game was the best part, but the prestigious award was given for the excellent promotions during a game day and throughout the season.


The club this season held 40 theme events, 27 premium giveaways, and 25 fireworks shows. If they had that at Yankee Stadium this season the ballpark would be on lockdown by Hal Steinbrenner. If you ask me, even if they hadn't had all of these promotions (which let me just say are actually really disturbing at times for people like me who just want to watch the game), it still would have been a blast going to ball park all summer.

We are pleased to announce we have added ANOTHER Minor League scout into the mix. Please join us in welcoming SPANdemonium! A quick Q&A should serve us well as an intro. Check it:

Well first of all, thank you 1 Blue Jays Way for this opportunity! I love the Jays and love their Minor League teams. Hopefully I will be able to contribute some Fisher Cats news that people haven't heard yet.

Q: How long have you been a fan of the longtime Blue Jays AA affiliate the New Hampshire Fisher Cats?

A: Well I've been a Cats fan since I've been a Jays fan, which I've been for several years. The Fisher Cats are a great team and Manchester, NH is a fine city. The experience of going to see them play and the players on the team make it that much more fun.


Q: It was reported that the Cats skipper got promoted to assistant coach with the Blue Jays. What are your thoughts on Luis Rivera making the jump from AA to the big leagues?

A: Luis Rivera did a fantastic job as the Cats Manager. What a great guy as well. In some ways, I thought that he wasn't fully ready to manage a Major League team, but he isn't, so I like the move. His role on the team now will be with John Farrell and former manager, Don Wakamatsu, so if anything, he is now even closer to managing a Major League team, which I think will eventually happen.


Q: How many Fisher Cats games did you attend in 2010?
A: I didn't get a chance to see the Cats play as much as I would have liked to this summer because I was busy back and forth between Vermont and New York but I saw them play plenty, had some fun moments with the players and saw some great games. Luckily, I was able to see Kyle Drabek pitch 5 times including 1 Post-Season start.


A: What are your observations on Merchantsauto.com Stadium? Do you have a favorite spot where you like to sit?
A: Merchants Auto is just an incredible ballpark, I think its better than some Major League parks. My day starts where I get to the park several hours before the first pitch, grab a bite to eat at the pub while watching BP, which overlooks the ballpark, and then see the people I know while waiting for the gates to open. MA.com is extremely fan friendly which makes the experience even better. I will then go to the pen and await the starting pitcher, say what's up, and watch him warm up, and then make my way down the first base line so I can talk to and watch the Cats warm up. The players are so friendly and fun to talk to. Many of them know me and I continue to keep in touch with some until I see them in March/April. I usually sit right behind first base, but you can pretty much sit wherever you want.


Q: We here at 1BlueJaysWay have a man crush on Cats leadoff man Darin Mastroianni. He is currently knocking the cover off the ball in Venezuela. Tell us your thoughts on him in general and give us your take on his defense in centerfield.
A: Well you guys aren't the only ones who have a man crush on Darin, every Cats fan says "Darin is my favorite" and why not? 40+ stolen bases and a .300 AVG will do that. His ETA is really undetermined because of his age (25) and our good buddy Vernon Wells, but Darin has the tools to be an above average Major Leaguer. I'm not going to say that I don't like his defense, but if he really worked on his throws he would be a better defender. Still, a sparkplug and his Grandma will say it best, he is a very, very good player. Again the only problem is his age.
Q: Is there anything else you think we should know about you?

A: I have a lot of video and pictures that I will soon upload to the site. Pictures and video including Kyle Drabek's No-Hitter. Also, I am not a Yankee fan at all. I hate the Yankees. I live in NY and go to a ton of Yankees games, but luckily I have t-shirts and hats of every other team to wear to the stadium.