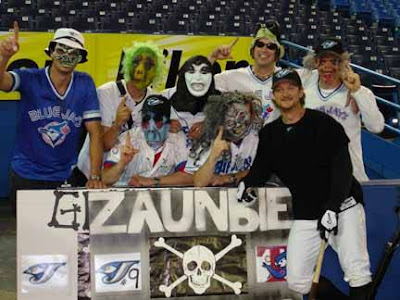 So Ginger and Zaunie have been tag teaming the pre game/in game/post game coverage of the MLB playoffs for Sportsnet. And from where I'm sitting, they are doing a bang up job. There does seem to be some decent chemistry there.

I fucking HATED Ginger doing play by play on the television. Like a lot.

Greg(g) provides some MUCH needed humor and actual baseball experience to the team.  His finest moment was when he was explaining how "the fat guy" pictured below on the left, grabbed Cruz's glove on this controversial home run.

Ginger, is well, Ginger. I guess I can sorta handle him in small doses.

As part of their bit they have been taking questions on Twitter, providing in game updates and general observations. It's pretty neat.

I decided to jump on this opportunity and see if whether or not they are a tight duo yet.

Here was my question:

@RogersSportsnet question for Zaunie: do you want to give Ginger a wedgie? If not, just think about it. All I ask.

And the response, 11 minutes later:

If you are referring to Cambell as Ginger, then no wedgie from me

It was good to see them sticking up for one another. Test passed.

For the record: Yes Greg(g). I was referring to the guy with a head the same color as a 6 alarm blaze, sitting directly beside you.

Hope the cheap bastards at Rogers can find a way to keep these guys together if / when Zaunie's playing days are numbered. He is a 39 year old, 15 year veteran after all.....
Posted by The Man With The Golden Arm at 8:45 PM