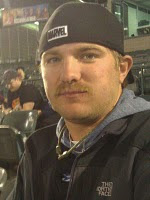 1bluejaysway is pleased to announce that we have developed a friendship with the Phillies blog PhoulBallz.com.  Since the 1993 World Series is long behind us, and with their former prospects climbing through our system and our former ace running their division, there's no better time to form a brotherhood with one of the finest Phils blogs out there.

PhoulBallz.com's Jay Ballz will be crossing over into the realm of Toronto to provide you, the people, with some inside access when the situation presents itself.  He has been kind enough to give us the go ahead to give you a taste of his brilliant work with a Kyle Drabek exclusive.


Drabek Preparing For Next Step
The transition has been easy for Kyle Drabek. In December, he was part of a package of young prospects that was traded to the Toronto Blue Jays for ace pitcher Roy Halladay. Now, as though nothing has changed, he's right back where he was last season...the star prospect on the pitching staff of a team in the Double A Eastern League.


Drabek has often stated that he wanted to stay in the Philadelphia organization, who drafted him in the first round of the 2006 amateur draft. The 22-year-old thought after the midseason trade rumors, that surrounded him possibly going to Toronto last year, passed with no action that all the turmoil was over and that he could simply relax and focus on getting to the big leagues with the Phillies. That wasn't the case, as the deal eventually came to fruition over the off-season.


In the Blue Jays system this season, Drabek doesn't have to worry about being dealt. He only has to concern himself with opposing batters and working on his secondary pitches to compliment his electric mid-90's fastball.

If you want to leave a comment on it, ask any questions or just want to say thanks for the insight, please do so on his site.

A fun fact from Jay:

Did you know that in the 1940's the Phillies made an unsuccessful attempt to change their name to the Blue Jays?
Posted by The Man With The Golden Arm at 12:56 PM