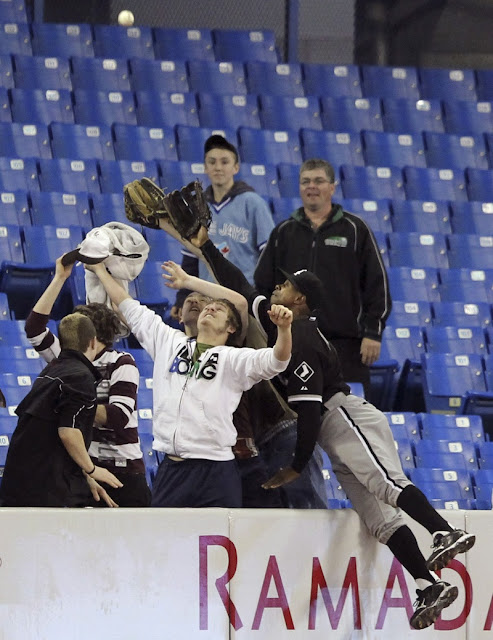 Dude with the glove makes a huge catch to take away an out from Pierre and the White Sox.  Next pitch Overbay grounds into a double play to end the inning.....it was that kinda game folks.

For the first time this year your Toronto Blue Jays entered the last inning of a baseball game without it being a save opportunity.  And we made sure we did it up right!

What I want to talk about is the games starting pitcher Brandon Morrow.  This is the second time I have watched him work and I'm starting to make some observations that I wanted to share.

I totally see why Seattle jerked this kid around so much.  He is tough to hit: THE FIRST TIME THROUGH THE ORDER.  It appears to me that he really only has two pitches that he believes in.  They both are thrown above 85 MPH.  And that is just not going to get you very far against Major League hitters.  He is unable to throw any wrinkles at them we he gets into a  hitter's count.

The velocity on his fastball is very inconsistent.  Now I know what your thinking, it really isn't suppose to be the same speed all the time, and you are right.  But hear me out.  He works the top part of the strikezone a lot.  With a 95 + MPH fastball, you can do just that.  Morrow can keep it up near that speed for about two innings.  That's it.  After that he loses anywhere from 3 to 9 MPH.  And no, they were not change ups.

The final pitch he threw to end the 4th inning was 88 MPH.  Omar Vizquel and his 78 career bombs in twenty fucking years took that batting practice heater to the warning track in rightfield.

I'll bet you can guess what happened THE THIRD TIME THROUGH THE ORDER.  Yeah, check this out:  hard single by Pierre, a hit batter, grand slam, double, shower.

I want to believe that his arm strength is not where it needs to be after being shut down in Spring Training camp for a couple of starts.  But if there is anything more to it than that, you may want to think about dusting off the panic button.  He needs to have that great fastball velocity for a few more innings or he needs to start pitching down in the strikezone.  He still has a player option and can be sent down to the minors but I think we are a little ways away from that still.

He may be a great pitcher someday but I'm not so sure it will be every fifth day.

When we put up the game line ups I asked how many fastballs you thought Randy would see in 4 AB's with Johnny Mac hitting behind him.  I counted 3 in his 3 AB's.

Mr. Umpire(s) missed two calls.  One on a Rios Cruz stolen base and the other on a Vernon tapper to third base.  I want to know why this profession has not been totally computerized yet?

The scouting report on Vernon Wells is you can get him out with the hard stuff up in the zone.  If any of you know him, tell him to raise his hands up a little early in the count please.  He needs to make the adjustment.

"future Hall of Famer, Omar Vizquel"
Seriously?  Here are Omar's numbers and the guys who are in the Hall that played shortstop.  What do you guys think?

Is there some help on the way?  Maybe this guy.
Posted by The Man With The Golden Arm at 5:26 AM