Game 15 Recap: Live And In Effect 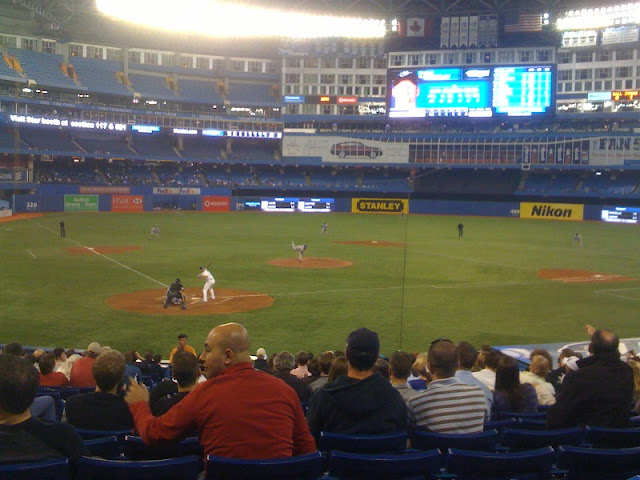 When you were a kid, did you ever look forward to something SO much only to find out when you finally got there that the main event was closed that day?

Alex Gordon was not in the line up and that really chapped my ass.  I'd like to think his manager is one of the hundred or so people that reads this fucking blog everyday and he decided to keep Gordon out the line up to avoid the nightmares but.....I doubt it.  Possible, but highly unlikely.

Vernon hit his 7th dinger of the young season.  A hanging breaking ball got tagged off the 3rd deck in left field.  Seems to me that he recognizes that teams are trying to get him out in the top half of the strike zone and he has made the necessary adjustment.

Bautista did his best E5 impression in the top of the third.  A chopper ate him up as it seemed he couldn't decide to charge it or stay back and take the long hop.  He did neither, and the ball ended up if left for a double.  The cameras didn't show how pissed Eveland was on the mound but yeah clearly unimpressed.  That runner eventually came around to score a unearned run.

Travis Snider was called on to bunt for the first time since little league.  After missing two decent pitches to bunt, he promptly drove an outside pitch the other way for a single.  Poor execution but it worked out this time.

Royals left fielder Mitch Maier went hard after a ball down the line in foul territory in the bottom of the 4th.  The ball and his glove ended up in the stands.....and he had to hop the wall in order to get his glove back because there was no one in the section to help him out.  Eventually some fat dude waddled over and gave him his leather back, which brings me to my next point.

Attendance was announced as 10,565 but I doubt there was more than 6 thousand people in the Dome.

The fat guy vendor that sells the candy and popcorn made a 4:20 reference.  Considering he walks up and down those aisles all day and still weights 260lbs, I think that was a given that he burns and eats his profits.

Kevin Gregg our new "intimidating" closer, uses this pussy song as his entrance music in a save situation:

Not quite as cool as Enter Sandman but I guess it will just have to do.

I dressed up in full baseball gear right down to the eye black.  I had cleats on, baseball pants and brought my trapper.  Thought it was a good idea when I did it, then took 30 steps down Front Street and had some second thoughts.  So the camera guy sneak attacked me in my seats and I declined the offer to be videotaped like an animal in a zoo, much to the dismay of my party.  The only thing cooler than being on the JumboTron, is turning down the offer of being on the JumboTron.

Get your brooms out cuz we are trying for the sweep in about 2 hours time.  LastRow500's will be in attendance for get away day.  Bet he gets to see fucking Gordon.