I know it’s been a while since I posted, I’ve been stuck on an island with a bunch of others running from some black smoke trying to solve the mystery, what is this island?

The reason I’m here is this, I’ve just read an article on MLBTR that has left me stunned and quite frankly embarrassed of what this team of ours has become.

The article breaks down the total cost of the starting rotation.

So in first place, I won’t leave you guessing because I’m sure you know who’ll it be.

So looking at the rest of the AL East

Let’s put this in to a pie chart to make us feel even better. 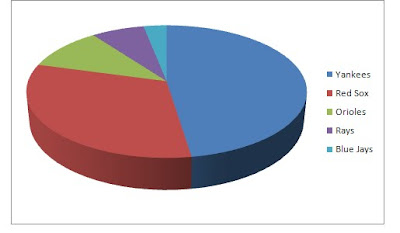 Makes you feel good about our chances going into 2010 in a week. This certainly adds ammo to Golden Arm’s argument that we have a chance to finish dead last in the AL this year. Well man, we’ve already finished dead last in one category and the season hasn’t even started yet.

I knew it was going to be low, but come on, we’re even behind the Pirates, The PIRATES! They point out that the total spent on starting rotations across is the bigs is $736 Million Dollars, so our piece is %.005. Wow. I know I know, we’re rebuilding, oh excuse me, just building. But come on, we still have to make it through this season to come out to the promised land that is the mighty 2011 season where everything is supposed to come together for us.

If you take out Doc's and Ryan's salary from our payroll this year, looks like the starting 5 for the Yanks is more then our entire payroll.

But the bigger kick to the nuts is, as the author points out. We are paying more for Roy Halladay this year to pitch for the Phillies then we are for our actual starting rotation. *gulp* It’s going to be a long year fellow Jays fans.

Check out the original post on MLBTraderumors.com
Posted by Nemesis Enforcer at 7:24 PM