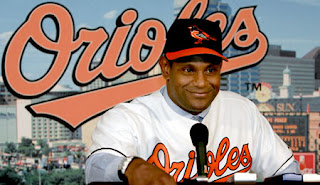 It was the summer of 2005.  During the offseason our divisional rivals the Baltimore Orioles had traded for Sammy Sosa.  As soon as heard he was coming to the AL, I began to think about what I was going to do to welcome him.  You see, he had been caught when he was with the Cubs in 2003 using a corked bat in a game. 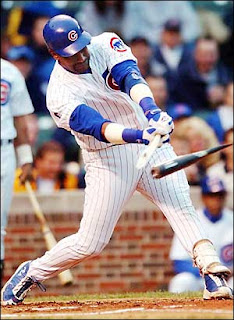 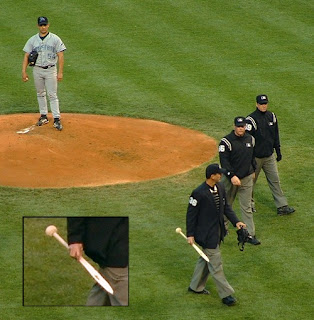 He was originally suspended for 8 games but had it reduced to 7 after a successful appeal.  MLB x-rayed 76 bats taken from Sosa's locker and five more of his on display at the Hall of Fame, but found no foreign substances.

Sosa said it was all an honest mistake.  "I use that bat for batting practice," he said. "It's something that I take the blame for. It's a mistake, I know that. I feel sorry. I just apologize to everybody that are embarrassed."

I wasn't buying it.  I though he was a cheater and I was gonna let him know about it.  I called 416-341-1234 and ordered 3 single game tickets for the 500 level.  My roommates Jerome Walker and Jerry Springer were more than happy to be witnesses to my idea, after I explained what it was I had in mind.

I went down to the local wine making store and bought a bunch of corks.  The guy at the store inquired about my purchase, I smiled and told him that he probably would hear about it very soon.  I went home and stuffed about 50 corks into a ziplock bag, giggling to myself the whole time.

My plan was simple: smuggle the corks into the Dome, sit in the 500 level and when the time was right, throw the bag onto the field and RUN.  In retrospect it may have not been the best idea I ever had.

So off we went into the city.  I remember walking down the stairs toward the gate with my contraband secured, or what I thought was secured, underneath my belt.  Halfway down the steps the unthinkable happens: the ziplock bag opened.  Corks were flying everywhere and Jerome laughed his ass off.  I stopped and collected myself somewhat trying not to draw any more attention to myself.  I was able to salvage the bulk of the corks and we breezed through security.

We took our seats and immediately made the observation that the view from up there was less than stellar.  Our villain Sammy Sosa was in rightfield and Doc was on the mound.  I decided to scope out my potential escape route and took a walk down to section 510.  There was no one around, no security, no vendors, no fans.  I also noted there was a ramp close by and figured it was possible that I could pull off my plan without being caught.

So back I went to my seat and watched what turned out to be a very competitive baseball game.  So competitive that I decided to wait till the later innings to put my plan in motion.  I figured that there was no way I could throw something on the field and just quietly return to my seat.  I did however wear a reversible jacket so that if anyone did see me, then I could just turn it inside out and play dumb.

Mid 8th inning, I got up and began my journey.  My roommates wished me well and we decided on a rendez vu point for after the game.  I stopped at the smoking section and tried to calm my nerves with a tasty cigarette.  Unfortunately for me, Sammy (not known for his defensive prowess) was replaced in rightfield in the bottom of the 8th.  I waited too long and my plan was foiled!

So there I am, standing in an empty section feeling somewhat disappointed.  I called Jerry and he offered this advice: Throw the corks on the field anyways.  I declined and said that it was pointless now.  I decided to watch the rest of the game from there, wallowing in my shame.

This should be the end of the story but a funny thing happened next: Gregg Zaun pulled a foul ball up into the fifth deck about a section over from where I was standing.  I ran over to where I thought it landed and began leisurely walking up the aisle excited because in all my time at the Dome, I had never gotten a game ball.  Then a young boy, who seemed to have appeared out of thin air, arrived.  Our eyes met briefly, and a scowl came over our faces.  It was me or him.  We were the only two people in that stadium that had a chance at getting the ball.  He was on one side of the section, I was on the other.  It was on.  A winner take all scavenger hunt.  He tore up his steps disregarding any fear of injury.  I reciprocated but was limited in my speed due to the fact I still had 50 odd corks in a ziplock bag concealed in my waistline.  We scanned each row thoroughly, similar to a hawk searching for it's prey.  Then I blinked.  I stopped going up the stairs convinced I had missed seeing the ball due to the fact I was rushing.  My competitor continued, no doubt more confident in his search grid.  A few more rows up from where I stopped, he found the ball and proudly raised it up for all to see.  I hung my head, unable to watch.  More shame.

I tell you this humbling story for one reason and one reason only: Your Toronto Blue Jays raised the price of tickets in the fifth deck last week.  I waited till now to share my thoughts because my initial reaction was so strong, that I knew the anger needed to subside before I could write about it.  Like many of you, I couldn't believe the team would do this considering the product on the field was not improved.  Why would they raise the prices?  Why now?  We just traded away our best player and we are in a rebuilding year.  What was I missing?

After a few days of reflection, I realized that the last time I actually paid to sit up there was this day.  So I came to the conclusion that it really does not effect me at all and I should just relax.  I do feel for the family of five that now needs to shell out an extra ten bucks to see a game.  Perhaps if the Jays had charged more for tickets up there back then, that little punk kid would not have been there, I would have gotten that ball and salvaged what was left of my pride.
Posted by The Man With The Golden Arm at 10:39 AM