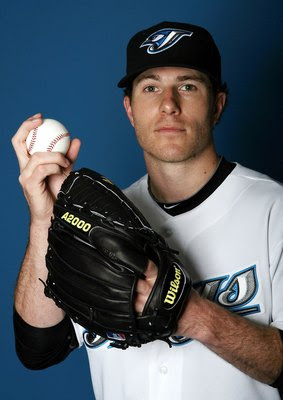 Lance Broadway has been implicated in an alleged aggravated assault that took place in Dallas, Texas on New Year's Eve.  He has not been formally charged yet but the investigation is ongoing.  Click here to see the police report.  Dallas Police say they have not interviewed the baseball players yet, but they do consider this serious.

The fracas began when Pinney spotted Cameron McGuire giving some undue attention to a friend's girlfriend on the dance floor of the Pegasus Room. Pinney had a quick word with McGuire and figured things were resolved. But apparently, this upset Broadway. As lawyer Randy Sorrels tells it:

"He's taken his shirt off, he takes a running start from Ivan's left-hand side, punching Ivan in the left side of the face, knocking him out. It broke his orbital socket, broke his cheekbone...shattered his nose, detached his retina...."

That must have been a hell of a punch.

"Right now, he can see motion -- he can't see people out of his left eye," Sorrels said. "....They're not certain if he's going to regain any eyesight....His retina has a risk of being detached [again] and losing all eyesight. He is facing three more eye surgeries, one more surgery for his cheekbone, nose and teeth area -- his teeth may be cracked in the...upper left jaw."

Pinney is also having trouble with his sense of smell.  Nowhere in my search does it say anything about alcohol being involved but you have to assume that this was not a sober moment, it being New Years and all.

In my opinion, Broadway was a long shot to make the opening day roster before these allegations came out.  This stuff certainly does not help his case for employment.  It should be noted that this alleged incident happened about 2 weeks after he signed his minor league deal with us.

Broadway said everything reported so far has been wrong.

On Thursday afternoon, the Blue Jays released the following statement regarding Broadway: "We are gathering information and as is our practice, we consider this a private matter as it's been before the courts."

Part of me wishes we had this guy a few years back.  I think him and Gibby would have been fun to watch from the saftey of my couch.
Posted by The Man With The Golden Arm at 12:05 AM