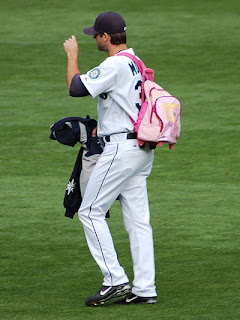 Boy Wonder has had a busy week.


He certainly is putting his stamp on this team.  The deal for Brandon Morrow was made official today after much speculation in the media.  We gave up Brandon League and minor league OF Johermyn Chavez.  It is important to note that he has said he views Morrow as a starter.

What we gave up:

Having watched Brandon League pitch in Toronto as a reliever for the last few seasons has been frustrating.  Every time he entered a game, you just never knew what to expect.  He has overpowering stuff and when he's on, he's almost untouchable.  There just isn't that many guys walking around this planet that can touch 100mph on the gun.  We have been patiently waiting for him to put it together and show some consistency.  On numerous occasions I thought he could be our future closer.  As an organization, it must have been difficult to part with such a good, young arm.

From where I'm sitting Johermyn Chavez looks like a long shot to make it to the big leagues.  His numbers for 2009 in single A look impressive.  But it was his second full season there after a slow year in 2008.  Top prospects tend to move through the lower ranks of the minors very quickly before reaching AA.  He played some winter ball this year and no one should be blown away by his performance.  Young hitters tend to strike out a lot due to lack of patience at the plate and he appears to fit that category.  Will he turn it around?  Who knows.  Some do, some don't.  With some good coaching he may.

What we got in return:

Brandon Morrow was drafted 5th overall in the 2006 MLB draft.  He has had some success as a starter, reliever and closer in the Majors.  He has two plus pitches, fastball and power curve.  He mixes in a change, probably only when guys start to time his heater.  As a starter he will need this pitch to be successful.  The biggest knock against him is his command of the strikezone.  He does have a history of arm problems but really what pitcher doesn't?  I think the way Seattle used him over the years may have been a contributing factor.  He never had a defined role on their pitching staff.  He has 15 career starts and 22 save opportunities.  Perhaps now that he has the comfort of knowing that he will be given the ball every five days, he will be able to get in a routine.  We can afford to be patient with him and live through the growing pains.

This trade helps both teams fill a role in the short term.  Therefore it must be viewed as a fair trade right now.  Seattle is loading up for next year and they did not seem to have a spot for Morrow.  League will try to help them get guys out in the 7th and 8th inning most likely with runners on base.  These are important outs to get for a team in the hunt.

Starters will always have more value to a team than relievers.  They throw more innings and directly effect the outcome of more games.  League can be replaced from within the organization.  I think we got the best player in the deal if Morrow is able to get into a rhythm.  He is under team control for one extra season and should be viewed as a top of the rotation type guy.  These guys are hard to get your hands on via trade especially when they are young.  Boy Wonder did very well in this transaction.  We may have an answer to my virgin posts question of: Who toes the rubber on opening day?

Things to watch for: