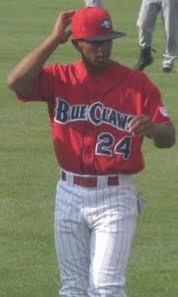 Our boy Jay Ballz did two interviews with Sir Gose A Lot last year. You can check them out here and here. Keep rocking the high socks and the crooked cap kid!

Gose was selected in the 2nd round, 51st overall, in the 2008 amateur draft. At that time, he was a 17 year old outfielder as well as a pitcher. Apparently he had "electric" breaking stuff on the hill. Gose received a $772,000 signing bonus and was rated as the Phillies 6th best prospect entering this year. The left handed hitting, left handed thrower is billed as being lightning fast. He stole 115 bases in 245 minor league games to date but was also caught 48 times. His full stats look like this:

I think it is fair to say that Adam Lind will be playing 1st base for your Toronto Blue Jays for a long, long time. It will be easy to find a DH in the off season.

With respect to Wallace, he has been traded three times in just over a calender year. Is he the next Andy Marte?

AA has said many times in the past that he covets the speed game. Today he proved that. Here is what he had to say on the FAN590 shortly after the trade was announced.

Take a look at your lead off hitter of the future:

The one and only Jay Ballz sent over a beauty pic that I just have to share: 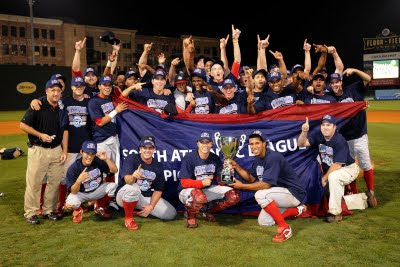 That's the new guy holding the trophy with not so new guy Travis d'Arnaud.

Foreshadowing?
Posted by The Man With The Golden Arm at 8:01 PM